“If by some special arrangement man could be made to breathe water instead of air, serious obstacles to attempts to penetrate deeper into the ocean and to travel in outer space might be overcome. Suppose we prepare an isotonic solution that is like blood plasma in salt composition and charge this solution with oxygen under greater than normal pressure. Can a mammal breathe such a solution? I performed the first experiments, with mice as the experimental animals, at the University of Leiden in 1961. After their initial agitation, the mice quieted down and did not seem to be in any particular distress. They made slow, rhythmic movements of respiration, apparently inhaling and exhaling the liquid. It became evident that the decisive factor limiting the mice's survival was not lack of oxygen but the difficulty of eliminating carbon dioxide at the required rate. —Johannes A. Kylstra”

“Dr. F. S. Parks, of Toronto, has been a prisoner in a German camp at Minden, where he practiced for 18 months among his thousands of comrades. Many of these men suffered from war edema or dropsy, the most prevalent malady in that camp. The German rations, along with hard work, exposure and depressing environment, were responsible for this dropsy, which prevailed most in the spring and early summer of 1917, when those rations were most insufficient. That diet was very low in protein (tissue building food), and was practically fat-free. It consisted almost entirely of soup; so that much fluid had to be taken to obtain a small amount of nourishment. This extra load of fluid was too great to be eliminated by the feeble heart and the overworked kidneys; hence, the dropsy, the anasarca.”

“More American walnut is needed for airplane propellers and gunstocks. During the four years' test in the present war this wood has proved to be the best material for the manufacture of the foregoing articles. The Government needs all the walnut that can be secured. ‘Fight with your walnut trees’ is the new slogan of the Hardwood Section, Bureau of Aircraft Production, and the Small Arms Section, Ordnance Department. Every tree counts.”

“Within a few months the vehicle known as the velocipede has received an unusual degree of attention, especially in Paris, it having become in that city a very fashionable and favorite means of locomotion. To be sure the rider ‘works his passage,’ but the labor is less than that of walking, while the exercise of the muscles is as healthful and invigorating. A few years ago, these vehicles were used merely as playthings for children, and it is only lately that their capabilities have been understood and acknowledged. The engraving represents one used by the well-known Hanlon Brothers [an acrobatic troupe] in their public exhibitions.”

A Theory of Rabies

“It is customary to regard the mid summer as tending to increase the prevalence of hydrophobia, and extra care is taken to prevent danger by confining and muzzling dogs, if they are not otherwise summarily disposed of. The practice of killing dogs upon the arrival of summer heat is of ancient date, and has the sanction of custom to recommend it. Some have, however, expressed the opinion that dogs are no more liable to attacks of rabies at this season than at any other. If, as has been stated, this terrible disease originates from excitement consequent upon the ungratified sexual instinct of the male dog, it is hard to see how the excessive heat of July and August could fail to aggravate such excitement.”

“Mr. Thomas W. Kingsmill, Secretary of the North China Branch of the Royal Asiatic Society, states that the use of bronze for cutting instruments still obtains in China and Japan. He says, ‘It is a fact that in those two countries, to the present day, in the midst of an Iron Age, bronze is in constant use for cutting instruments, either alone or in combination with steel. In the Canton province, every school boy may be seen with a clasp knife made of a sort of bronze, case, spring and blade being all made of this material. To form the cutting edge of these clasp knives, a thin piece of steel is let into the bronze blade; but knives made entirely of bronze, and occasionally ornamented and riveted with copper, are not uncommon.’” 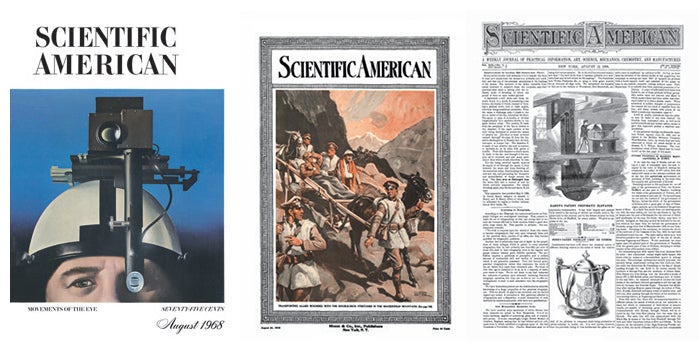 11 hours ago — Haitao Guo, Guangxiang "George" Luo, Shou-Jiang Gao and The Conversation US

New Nerve-Growing Method Could Help Injured Soldiers and Others

Survival of the Fittest Cells