“Most physicists and astronomers believe that the sun’s heat is produced by thermonuclear reactions that fuse light elements into heavier ones. To demonstrate the truth of this hypothesis, however, is still not easy, nearly 50 years after it was suggested by Sir Arthur Eddington. Of the particles released by the hypothetical reactions in the solar interior, only one species has the ability to penetrate to the surface (a distance of some 400,000 miles) and escape into space: the neutrino. Within the past year a giant neutrino trap has begun operating in a rock cavity deep below the surface in the Homestake Mine in Lead, S.D. The initial results published have left astronomers and astrophysicists somewhat puzzled because the neutrino flux rate seems low.—John N. Bahcall”

“The Tarrant triplane provides one more historic landmark in the growth of aircraft, the future of which rapidly vanishes from the sight of even the most gifted of prophets. The machine has a total plane surface of 5,000 square feet, and weighs with full normal load 45,000 pounds. The machine is particularly remarkable, inasmuch as it is not only the largest airplane in the world, but some of the methods of construction are entirely new. Unfortunately, the first Tarrant airplane, known as the ‘Tabor,’ was destined to be shortlived, despite the months upon months of painstaking work involved in its construction. In a few minutes’ time the entire structure was destroyed upon takeoff at Farnborough, England.”

The Seeds of War

“The Signing by Germany of the Treaty of Peace at Versailles brings to an end the War of Arms begun by the Germans on the fields of Belgium. If the vanquished nations who set their hand and seal to the covenant of peace did so with a hatred, blind, unreasoning and implacable in their hearts, it will be merely a question of time and opportunity before the armed multitudes will be on the march, and red ruin will stride again across the world. It is our firm belief—for there is no evidence to the contrary—that the nations of the Entente, in this the supreme hour of accomplishment, are more concerned with the healing of the world than with the humiliation of the enemy.”

Economist John Maynard Keynes predicted at the time, correctly, that the harsh punitive measures in the treaty would cripple the German economy.

“An interesting article by Prof. E. W. Gudger, in a recent issue of Natural History, deals with the time-honored story on which most of us were brought up that South American monkeys are in the habit of crossing alligator-infested streams by linking their tails and legs to form a living bridge. The story was first told, so far as known, by the Jesuit priest Padre Jose Acosta in a work published in 1589. The first person to dispute its veracity was Baron Humboldt. Lately, Messrs. Leo E. Miller and George K. Cherrie, of the American Museum of Natural History, who have done so much traveling and collecting in South America, have suggested a plausible origin for such tales. They think that the story of the ‘monkey bridge’ has come about through observation of a procession of monkeys crossing a ravine or stream on a pendent liana [vine].”

“The British Medical Journal says: ‘Owing to the impossibility of keeping paint from coming into contact with the skin while they are at work; and to the almost universal practice among them of touching their food with unwashed hands; and to the habit of some of them of wearing corduroy, fustian, and other clothes difficult to cleanse, painters absorb large quantities of the hurtful metal [lead], and suffer gravely in consequence. If he continue to follow his trade, the more serious diseases—paralysis or kidney disease—are almost certain to attack him, and to render him, if not entirely unable to work, so weak and prostrated that in mental as well as in physical power, he will be but as the ghost of his former self. Different substances have been used instead of lead in the manufacture of paint, and with an encouraging amount of success. Zinc has been employed, and we have had favorable reports of it.’ ” 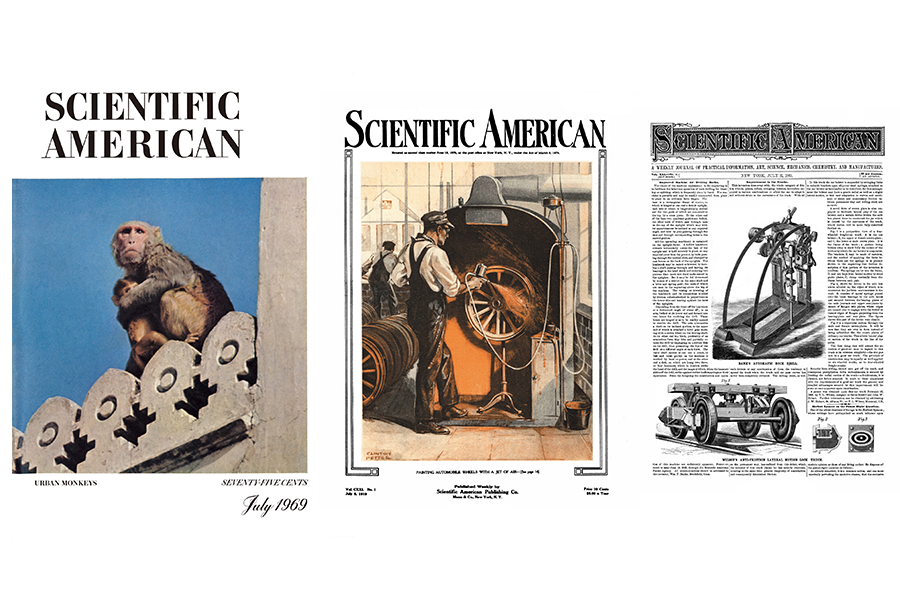