“Up to 1963 the rate of discovery of transuranium elements had been high. Each step forward has required more and more complex apparatus and methods to increase the number of protons in the nucleus, while at the same time the stability of the nuclei produced has decreased, making them difficult to observe and identify. Nonetheless, heavy synthetic elements are a subject of livelier interest than ever because of advances in the theory of nuclear stability, which have given rise to the possibility of synthetic elements beyond the dreams of early workers in the field. Concurrently great progress has been made in manufacturing in quantity the unstable elements through element 98, in enlarging knowledge of their properties and in finding worthwhile applications for them.—Glenn T. Seaborg and Justin L. Bloom”

Seaborg shared the 1951 Nobel Prize in Chemistry for his work in this field.

“The only living men who make tools by flaking flint are usually believed to be a few primitive tribesmen who still follow the customs of their forebears and a handful of specialized craftsmen who fashion the flints needed for surviving flintlock firearms. During recent archaeological work in Turkey, Jacques Bordaz of the University of Montreal found this belief to be in error: flint-knappers in the Turkish village of Çakmak produce 500 tons of flint blades every year, enough to provide fresh cutting edges for all the threshing sledges in rural Turkey. Turkish wheat-growers like to separate the grain from the stalk by dragging a sledge over sheaves spread on a threshing floor. Each sledge has 600 to 800 blades of flint, a little less than two inches long, set on edge in a slot. Each knapper can turn out 500 pounds of blades a day from locally quarried nodules of flint.”

New agricultural machinery made this craft obsolete in the 1980s.

“The substitution of helium for hydrogen, which is one of America's contributions to military aviation, removes one of the greatest prejudices against the lighter-than-air craft. For now that helium gas, which is non-inflammable, is used in place of explosive hydrogen, there is no further need to think of conflagration during flight or on the ground. Engines can be placed anywhere, and so can the galley and stoves and heating plant, since the dirigible is no longer a huge explosive charge held in a silk bag, ready to burst into flames at the slightest spark. Frankly, the airplane as a commercial proposition is today but a poor second to the dirigible. The airplane is to be the competitor of the fast railroad train, while the dirigible [see illustration] is destined to be the carrier of passengers and goods over long routes, in competition with the intercontinental steamers.”

“A new invention, in the shape of machinery for making ice and performing the refrigerating process, was tested on board the ship William Taber, lying at the foot of Nineteenth Street, East River, New York City, in the presence of a number of scientific and mechanical gentlemen, to whom invitations had been extended. The ship has been thoroughly fitted with this new apparatus for the preservation, during transportation, of fresh beef and other perishable food for a long period, and she will sail for Texas some day next week. The two great principles in the mechanism of the affair seem to be, first, the application of pumps to the liquefaction of carbonic acid [carbon dioxide] gas; and second, the remaking of it into gas over and over again ad infinitum.”

The ship failed to make its delivery. The date of the first successful refrigerated ship voyage is usually given as 1877.

“Not the least interesting of the English reports on the French Exhibition is on toys. The chief French toy is a doll, not a representation of an infant for a child to fondle, but a model of a lady attired in the height of fashion, a leading manufacturer changing the costume every month to ensure accuracy. As an excuse for this apparently early inoculation of childhood with a love for finery, it is explained that these dolls serve as models to colonial and other extra-Parisian milliners before they are handed over to their children. French dolls, unlike our wax-faced natives, have china heads.” 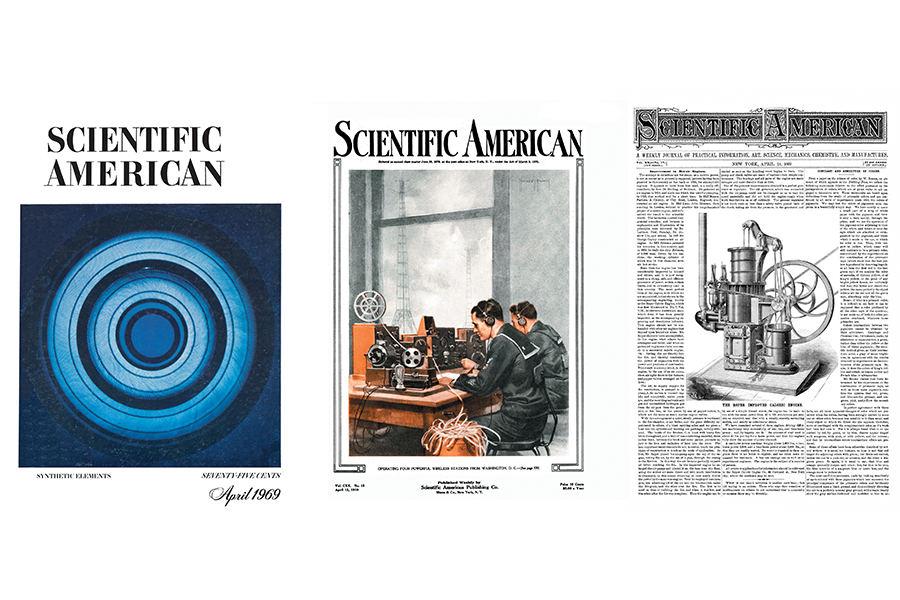