“Since the introduction of the transistor in 1948—which in its day seemed a marvel of compactness compared with the glass vacuum tube—the size of electronic devices has been reduced by a factor of 10 roughly every five years. A great part of the stimulus for miniaturizing electronic circuits came from ballistic-missile programs. As the microtechnology was developed, however, it was speedily applied to commercial computers. It now seems inevitable that microelectronic circuits will soon find their way into a variety of new applications whose impact on everyday life—in the home, in the office, in the school and on the highway—will be profound.”

“Dr. Robert H. Goddard of Clark University, in an account of apparatus invented by him for the purpose of exploring the extreme upper strata of the atmosphere, mentioned casually the possibility of giving this apparatus sufficient driving power to carry it to the distance of the moon. In conformance with the purposes which impelled him to make this investigation, Dr. Goddard, the first time he sends this little messenger aloft, will recover data of much meteorological value. But he will not shoot at the moon—somebody else will have to do that for now.”

“In order to expedite the harvesting of natural ice, there has been introduced a gasoline-driven saw of the type shown. This saw consists of an automobile-type power plant and a circular saw. The saw is pushed along, the operator behind furnishing the motive power. The portable saw cuts the ice into 20-foot squares. These squares are guided through the water to a gang of four circular saws, which cuts them into the regulation sized cakes.”

“No operation in submarine engineering is more important or attended with greater personal risk than diving. This art has, however, been so far advanced, and apparatus for diving has been so far perfected, that divers now descend to depths of over one hundred feet. There are about thirty professional divers in the United States, and the annual mortality has been on the average about four of this number.” 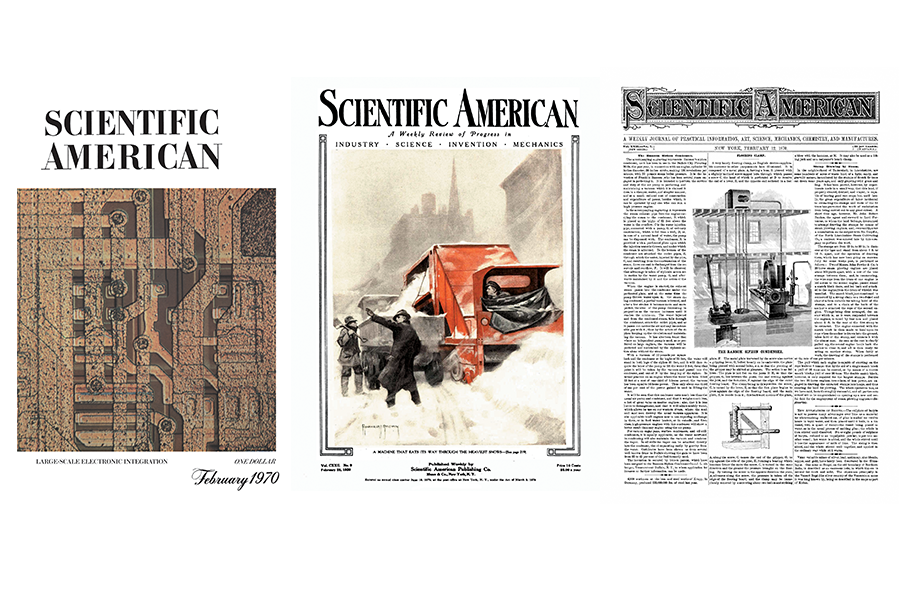 A comment from an 1848 issue still holds true: “Down to the present era . . . mankind has been incessantly in quest of refrigeratives.” In the 19th century ice harvested during winter months kept food fresher at home and during shipping. Artificial cold, first demonstrated in 1756, remained complex and sometimes dangerous and was limited until the 20th century. By 1909 the average diet of “rural and urban, rich and poor, has undergone a great change in consequence of the practical application of cold.” After 1928 the wonder chemical freon (not so wonderful: banned and replaced in 1987) allowed workable home refrigerators to displace the “icebox.” Cold also helped manufacturing efficiency and human comfort. In a 1933 article Willis Carrier (you're probably familiar with his company) lauded “our new command of the conditions of the air which surrounds us.” Cooling (or, in February, heating!) the air around us requires energy and increases carbon emissions. But improved technology will help decrease energy use and reduce the amount of food grown and thrown away worldwide.