“Respiratory failure is now reversible in a large percentage of cases if proper treatment is provided. Such treatment is available in respiratory intensive-care units: properly equipped hospital facilities directed by a new kind of medical specialist, the intensivist, and manned by teams of trained physicians. The increasing capability of respiratory intensive care is the result of an increasing discourse between respiratory physiologists and physicians who treat patients. Data that have long been available are now being brought to bear through active intervention to preserve the life of critically ill patients. Treatment of acute respiratory failure is probably as close to being a quantitative science as any field of clinical medicine can be today. In this situation, precise measurement approaches or exceeds in importance the ‘clinical judgment’ that for so many years has been the prime quality of the good physician.”

“France's task of beating swords into ploughshares included the conversion of tanks into something having peacetime value. Some have been employed for towing canal barges; others have become agricultural tractors; others have made their way into the factory. But the most novel conversion is no doubt that of the mountain-climbing tanks, now available to tourists of the French Alps of Savoy. Shorn of its coat of armor and its fighting equipment, and provided with seats, it becomes an excellent passenger-carrying vehicle for traversing rough terrain. Our illustration offers some idea of the thrills of a ride in the mountain-climbing tank.”

“Professional horse-breeders still boost for the business; but they are merely whistling to keep up their courage. The days of the horse as a beast of burden are numbered.

The automobile is taking the place of the carriage horse; the truck is taking the place of the dray horse; and the farm tractor the place of the farm horse. Nor is there any cause to bemoan this state of affairs. We all admit that the horse is one of the noblest of animals; and that is a very good reason why we should rejoice at his prospective emancipation from a life of servitude and suffering. That, of course, is the humanitarian side of it; the business side is more to the point: the machine is going to do the hard work of the world much easier and much cheaper than it ever has been done. At least 50 percent of the horses will have been laid off by January 1st, 1920.”

“A long article recently appeared in the New York Times, taking the strongest ground against vaccination, urging that it propagated disease, while as a prevention of mortality from small-pox, it was utterly inefficient. This article represented views now entertained by many upon this subject. The London Lancet in an article in favor of vaccination makes the following remarks: ‘The fact is, that the only people injured by the Compulsory Vaccination Act are medical men. There is no disease which pays medical men better than small-pox. A good attack of it makes man, or child, a patient for a solid month.’”

“Letter of John F. Boynton, Geologist, to Prof. Henry Morton, of the Pennsylvania University: 'Dear Sir: On Saturday last, some laborers engaged in digging a well on the farm of W. C. Newell, near the village of Cardiff, about 13 miles south of this city, discovered, lying about three feet below the surface of the earth, what they supposed to be the ‘petrified body’ of a human being of colossal size. Its length is ten feet and three inches, and the rest of the body is proportionately large. The excitement in this locality over the discovery is immense and unprecedented. Thousands have visited the locality within the last three days.

On a careful examination, I am convinced that it is not a fossil, but was cut from a piece of stratified sulphate of lime. It was quarried, probably, somewhere in this county [Onondaga, N.Y.], from our Gypsum beds. My conclusion regarding the object of the deposit of the statue in this place is as follows: It was for the purpose of hiding and protecting it from an enemy who would have destroyed it, had it been discovered.'”

The statue had actually been sculpted the year before under the direction of one George Hull as either a joke or a hoax and buried on the property of his relative William C. Newell. 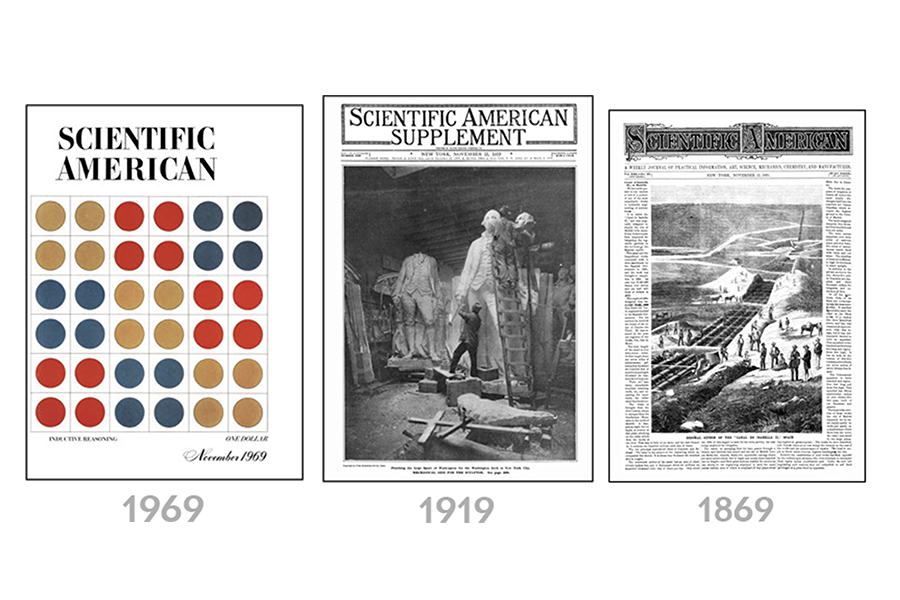