The Promise of Nuclear

“The need to generate enormous additional amounts of electric power while at the same time protecting the environment is taking form as one of the major social and technological problems that our society must resolve over the next few decades. Nuclear reactors of the breeder type hold great promise as the solution to this problem. Producing more nuclear fuel than they consume, they would make it feasible to utilize enormous quantities of low-grade uranium and thorium ores dispersed in the rocks of the earth as a source of low-cost energy for thousands of years. —Glenn T. Seaborg and Justin L. Bloom”

Today more than 400 nuclear power plants are in commercial operation worldwide; only two are fast-breeder reactors.

“During the past hurricane season in the West Indies the U. S. Weather Bureau has carried out a program of upper-air observations in order to determine what relation, if any, exists between the ‘winds aloft’ (as winds in the upper air are now called by the Bureau) and the movements of hurricanes. Pilot-balloon observations have been made twice a day at stations maintained by the Bureau at Key West and at San Juan, Porto Rico, and at stations maintained by the Navy at Colon and Santo Domingo; data obtained at the Weather Bureau and Army aerological stations in Texas are expected to help in the investigation.”

“Dr. William Scheppegrell publishes statistics showing the beginning and ending of the spring and autumn hay-fever seasons in each State of the Union; the plants chiefly responsible; and a list of ‘hay-fever resorts’ for all States where such places are known. These resorts are free from hay-fever pollens, where the hay-fever patient can find relief from the disease. As the pollen of most hay-fever plants is very buoyant and will traverse 5 or 6 miles when the winds are favorable, very few places in the country are absolutely free from this troublesome disease.”

“The accompanying illustration of Redmond's patented steam plow is an accurate copy of a photograph taken of the machine at work in the field. Many attempts at locomotive steam plowing have heretofore proved failures, from the simple fact that the hold of the traction engine on the ground was not equal to the resistance of the plows. In the machine here represented that hold on the ground is secured by the protrusion of a series of twelve anchors through the rim of each wheel. The fuel necessary to keep up steam in these tubular boilers is very little, probably not over six hundred pounds of best coal per day.” 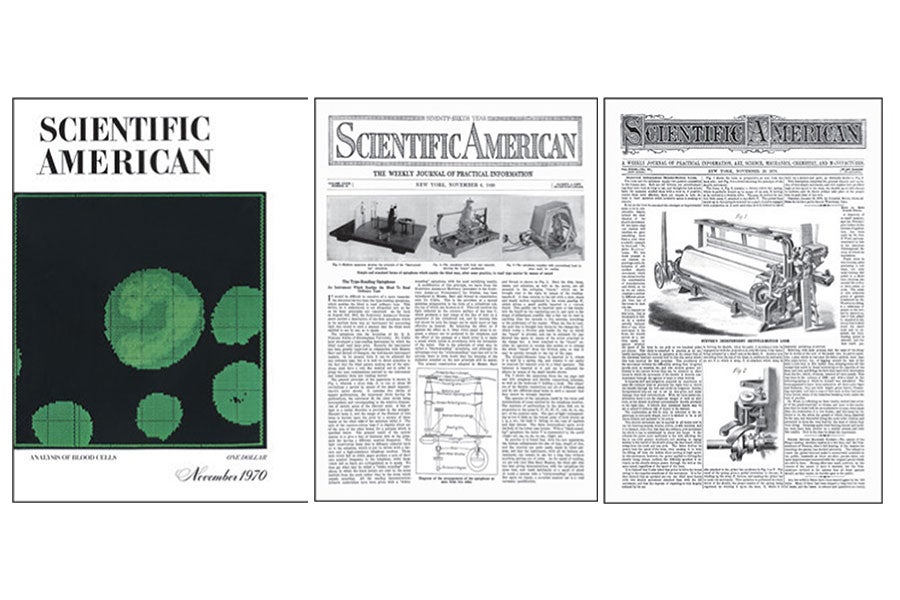 Plants, seeded, grown and harvested for us or livestock, are the basic building blocks of our civilization. Issues of Scientific American from the early decades after its founding in 1845 reflected a mostly rural nation. The pages are filled with mechanical contraptions (including the steam-powered plow shown above) that look like their inventors were trying to ease the backbreaking labor of farming. By 1967 only 5 percent of the labor force worked in agriculture, thanks to widespread introduction of better technology (such as the mechanical cherry picker—seen at the left—from that year) and the application of biological and chemical sciences to improve crop yields and decrease harvesting costs.

Dan Schlenoff was a contributing editor at Scientific American and edited the 50, 100 and 150 Years Ago column for one seventh of the magazine's history. Credit: Nick Higgins