More than 10 years ago a troubling report emerged from the National Toxicology Program laying out concerns about the chemical bisphenol A (BPA) based on a disparate collection of data gathered thus far. BPA, a synthetic chemical used in the linings of food cans and in plastic bottles of all kinds (even baby bottles), had been shown to have ill effects on the brain, especially in developing fetuses and young children. Although the data were not ironclad, the public response was fierce. Consumer groups lobbied hard and pressured manufacturers to swiftly remove the chemical from their products. By 2011 both Canada and the U.K. had banned the compound, and the U.S. followed suit a year later.

Now another group of chemicals is moving into the spotlight. A class of fluorochemicals, abbreviated PFOAs, is found in hundreds of everyday products, from waterproof jackets to food wrappings to cookware. And now the compounds are showing up in human blood samples. Because these chemicals don’t easily degrade, scientists are trying to get a handle on how worrisome the latest discoveries are. XiaoZhi Lim investigates in “The Fluorine Detectives.”

If you find this news a bit stressful, take a few deep and intentional breaths. As Christophe André writes, ancient breathing techniques and modern science are coming together to help people manage their anxiety and moods (see “Proper Breathing Brings Better Health”). Elsewhere in this issue David Adam reports on a surprising drug that is emerging to treat a rare genetic disease– the medicine got its start as a weed killer (see “A Father’s Fight”). For some, this particular chemical might be the cure they’ve been waiting for.

This article was originally published with the title "A Chemical World" in SA Health & Medicine 1, 2, (April 2019) 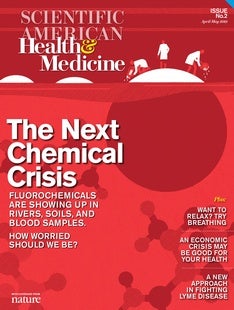