IN the vicinity of the star S Corona Australis Innes and Worsell have found a patch of sky 25 minutes of arc in diameter where no star can be seen with a 9-inch refracting telescope. According to Innes, who discusses the subject in “Transvaal Observatory Circular No. 5,” the apparent absence of stars in this region is due to the occurrence of some absorbing medium, interposed between us and distant parts of the universe. Stars in the neighborhood of the dark region are enveloped in nebula; while just on the border of it there is a star which has been observed to fluctuate in magnitude between 11.0 and 12.2, and which was invisible during the years 1899-1901. The latter fact is accounted for on the supposition that the absorbing medium was for a time in front of the star, but has since withdrawn from it.

This article was originally published with the title "A Dark Substance in Space" in Scientific American 105, 27, 602 (December 1911) 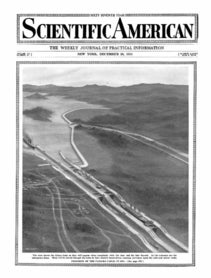