Astronomers estimate that every star in the universe has about one planet in orbit, on average. Given that there are somewhere in the neighborhood of 250 billion (yes, with a “b”) stars in the Milky Way alone, the number of potential planets out there is staggering. Despite this apparent plethora, researchers have yet to conclusively observe any moons orbiting one of these faraway worlds. As Lee Billings writes in “Astronomers Tiptoe Closer to Confirming First Exomoon,” Columbia University investigators have reported compelling data that a Neptune-size exomoon is circling a planet around the sunlike star called Kepler 1625 b, about 8,000 light-years from Earth.

Elsewhere in this issue, Alexandra Witze covers the latest efforts to clean up the 20,000 junk items that humans have littered in space (see “The Quest to Conquer Earth’s Space Junk Problem”). And fascinating new research is focused on the human eye to get at one of the unresolved issues in quantum mechanics: the measurement problem (see “The Human Eye Could Help Test Quantum Mechanics”). From moons to single photons, astronomy and physics never fail to stagger the mind and the imagination.

This article was originally published with the title "A Universe of Possibilities" in SA Space & Physics 1, 5, 2 (December 2018) 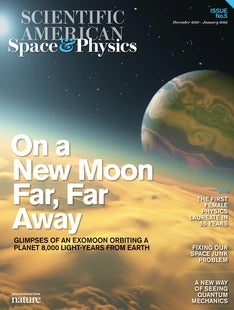