In 1800 astronomer William Herschel kicked off more than a century of discovery when he detected infrared radiation. It was the first observation of electromagnetic radiation other than visible light and the first verification that there is more in the universe than humans can see with their eyes. In fact, the human eye perceives only about 0.0035 percent of the total electromagnetic radiation in the universe. Therefore, with all our light-based telescopes, on Earth and in space, we observe a mere fraction of the radiation that fills the cosmos. To literally expand our field of view, several space missions have gathered data on the universe in x-rays, ultraviolet rays, gamma rays, and so on. Davide Castelvecchi reports on an exciting telescope launched this summer that will collect high-energy x-rays from the universe, with aims to create a 3-D map of never before seen supermassive black holes and some 700,000 stars. It gives a new definition to the term “eye-opening” (see “New Space Telescope Will Map the Universe in High-Energy X-rays”).

Elsewhere in this issue, Anil Ananthaswamy covers the recent breakthroughs that are bringing a quantum Internet closer to reality (see “The Quantum Internet Is Emerging, One Experiment at a Time”). And Shannon Hall writes about the growing momentum for renewed explorations of Venus (see “Venus, Earth’s Evil Twin, Beckons Space Agencies”). In our own cosmic backyard and beyond, there is so much more to see. 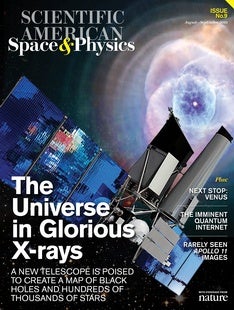