A device especially designed to facilitate removing and replacing worn-out brasses in the journal boxes of car axles, or for raising the box without disturbing the position of the wheel on the track, is shown herewith, and has been patented by Daniel A. Keller, of Rincon, New Mexico. The jack is shown in perspective in full lines in the illustration, its position on the car wheel relative to the journal box, when in use, being indicated by dotted lines. Transverse hooks, adapted to engage the top of a car wheel, are formed integral with a threaded cross bar, in which screws a screw rod, on which is hung a cross bar with depending angular arms, adapted to engage the under side of a journal box. The device affords a square lift, preventing cramping of the journal brass at any point. The power is applied at a point about fourteen inches above where it is applied on the ordinary pony jack, and the device can be set and used at ordinary passenger platforms. The inventor claims to be able, with this jack, to raise a journal box in one-fourth the time taken with the usual appliances, doing the work with less labor.

This article was originally published with the title "An Improved Railway Car Jack" in Scientific American 73, 22, 341 (November 1895) 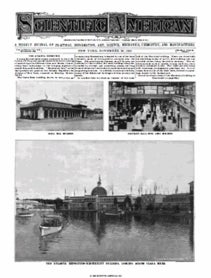