The SCIENTIFIC AMERICAN enters its twenty-fifth year on the first of January next, and to mark this period of a quarter of a century in which it has maintained its position as the leading journal of popular science in the world, we have purchased from the executors of the estate of the late John Skirving, Esq., and propose to issue on New Year's da ', the fine steel engraving executed by John Sartain, of Philadelphia, entitled ” MEN OF PROGRESS—AMERICAN INVENTORS." The plate is 22x36 inches, and contains the following group of illustrious inventors, namely, Prof. Morse, Prof. Henry, Thomas Blanchard, Dr. Nott, Isaiah Jennings, Charles Goodyear, J. Saxton, Dr. W. T. Morton, Erastus Bigelow, Henry Burden, Capt. John Ericsson, Elias Howe, Jr., Col. Samuel Colt, Col. R. M. Hoe, Peter Cooper, Jordan L. Mott, C. H. McCormick, James Bogardus, Frederick E. Sickles. The likenesses are all excellent, and Mr. Sartain, who stands at the head of our American engravers on steel, in a letter addressed to us says “ that it would cost $4,000 to en grave the plate now,” which is a sufficient guarantee of the very high character of the engraving as a work of art. The picture was engraved in 1868, but owing to the death of Mr. Skirving, a few copies only were printed for subscribers at $10 each. A work embracing so much merit and permanent interest to American inventors, and lovers of art, deserves to be much more widely known. We propose, therefore, to issue, on heavy paper, a limited number of copies at the original price of $10 each, to be delivered free of expense. No single picture will be sold for less than that price, but to any one desiring to subscribe for the SCIENTIFIC AMERICAN, the paper will be sent for one year, together with a copy of the engraving, upon receipt of $10. The picture will also be offered as a premium for clubs of subscribers as follows to those who do not compete for cash prizes : For 10 namesone year $30 one picture. ” 20 “” “ 50 “ ” 30 “” “ 75 two pictures. “ 40 “ “ “ 100 three “ ” 50 '*” “ 125 four “ In addition to the above premiums we also offer the following cash prizes: for the largest list of “ second do “ third do “ fourth do “ fifth do “ sixth do “ seventh do “ eighth do “ ninth do “ tenth do “ eleventh do “ twelfth do “ thirteenth do “ fourteenth do “ fifteenth do Subscriptions sent in competition for the cash premiums must be received at our office on or before the 10th of February next. Names can be sent from any post office, and subscriptions will be entered from time to time until the above date. Persons competing for the prizes should be particular to mark their letters “ Prize List” to enable us easily to distinguish them from others. Printed prospectuses and blanks for names furnished on application.

This article was originally published with the title "Announcenment for 1870—Splendid Work of Art and Cash Premiums to be Given" in Scientific American 21, 23, 361 (December 1869) 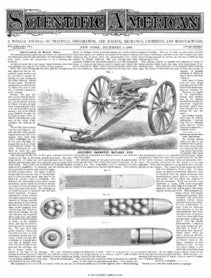