CORRESPONDENTS who expect to receive answers to their letters must, in all cases, sign their names. We have a right to know those who seek information from us - beside, as sometimes happens, we may prefer to address correspondents by mail. SPECIAL NOTE.—This column is designed for the general interest and instruction of our readers,not for gratuitous replies to questions of a purely business or personal nature. We will publish such inquiries, however-when paid for as advertisemets at $1*00 a tine, under the head of"Business and Personal." iWAll reference to backnumbersshould be by volume andpage. C. P. P., of Kansas.—The chemical symbol HO, signifies one equivalent of hydrogen combined with one equivalent of oxygen. The equivalent of hydrogen being 1 and that of oxygen 8, the equivalent of HO, or water, is 9. The equivalent of a substance in the old nomenclature is based upon the weights in which, or in some multiple of which, it generally combines with other bodies. The new nomenclature takes into account the volumes of substances when in a gaseous state, as it has been found that generally the molecules of compound bodies when reduced to the gaseous state occupy equal volumes, and that, also, a simple relation exists between the volumes of any two gases which combine together. It also makes a distinction between the terms equivalent and atomic weight and from the above considerations as well as others equally forcible, makes the atomic weights of many substances just double the numbers assigned in the old nomenclature as their equivalents. Hence, according to the new nomenclature, water is represented by H O. In our paper when we find occasion to use chemical formulae we still use the old nomenclature, as many of our readers, who have all their lives been accus tomed to it, have not probably found time to post themselves upon the new, which is now generally adopted in scientific schools, and in very recent treatises involving the use of chemical symbols. A. M., of La.—We believe that no cheap ice machine suitable for use in families has yet been introduced. A cake of ice weighing 30 lbs maybe kepteasily48 hours in a good refrigerator before it melts away, if the box is not too frequently opened. You can filter and cool watpr by passing it through an underground filter, but with the low head you have got it will not enter the house with much force. It will, however, probably answer your demands. R. H., of N. Y.—You can cleanse barrels from must, by burning a small quantity of sulphur in each, after which they should be well rinsed with cold water. M. L., of Vt.—The term isomeric is applied to compound chemical substances, which, having the same elements combined in the same proportions, still exhibit different properties. A. A. S., of Wis.—The greater the hight to which a given quantity of water is raised in a given time.the greater the power required to raise it. J. B., of Mass.—You will not in our opinion be able to punch wires in the way you described. The temper is already out of annealed wire and we don't see why you should seek to do what is already done. W. F., of Pa.—Good pine or cedar is the best timber for making vats, etc., for holding boiling water. Soluble glass will not be of service to you for such purposes. S. H., of Ind.—As soon as we can get a locomotive constructed that will run as fast as the initial velocity of a cannon ball we will try the experiment you suggest, and shall expect to find that the ball will drop perpendicularly from the mouth of the cannon to the ground.

This article was originally published with the title "Answers to Correspondents" in Scientific American 21, 7, 108 (August 1869) 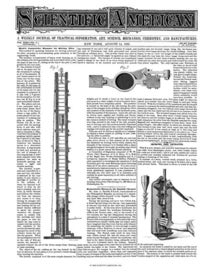