At a recent event about the latest science of exoplanets, former NASA Kepler mission astrophysicist Natalie Batalha redefined what it means to look into the night sky. Rather than seeing solitary stars peppered in space, she said, she now thinks of each point of light as its own solar system of orbiting planets. Astronomers estimate that there are some 100 billion to 200 billion galaxies in the universe—averaging 100 million stars apiece. The number of exoplanets out there is mind-boggling, each a potential cradle for life. Given the math, it seems impossible that we humans would be the only living things in the cosmos.

The variety of climates and conditions on these faraway bodies would be staggering. Even our own sister planet Venus is drastically different from Earth and demonstrates the difference 40 million miles can make—a cosmic stone’s throw. Researchers are using such insights to intuit the conditions of planetary bodies light-years away and are even looking for moons around exoplanets, which may have suitable conditions for life.

To seek out new worlds, technology is advancing quickly. Boosted by the James Webb Space Telescope, launched at the end of 2021, the search for alien life over the next decade now has real depth. Next-gen enormous rockets coming soon promise space missions that can go farther and deploy more powerful telescopes. Privately funded scopes and revolutionary observational techniques using our own sun as a gravitational lens portend major advances in the near future.

Perhaps no other field of research has such a hold on the imagination. Recently spotted interstellar rocks and meteors spurred debate over their origins, as did a mysterious radio signal detected from the star Proxima Centauri, a mere four light-years away from Earth. If we do ever have convincing evidence that we’ve discovered extraterrestrial life, what is the best way to communicate that news to humanity?

Looking for life off-Earth prompts interesting philosophical questions. If we use the chemistry of life’s beginning on our own planet as a rubric, it might dictate (or limit) how we investigate life elsewhere. The universe may be teeming with unexpected chemical life-forms that look very different from us. And then there’s the matter of chance. As astrophysicist John Gribbin writes, a serendipitous chain of events had to occur—from the timing of our solar system’s formation to our planet’s distance from the sun—for organisms to spring up on Earth. It may well be that such conditions are actually rare. And even if alien civilizations are abundant, the universe is immense—beyond the scope of the human mind, certainly—and our cosmic backyards keep us far apart.

Legendary astronomer and science educator Carl Sagan was a firm believer that the cosmos is full of intelligent beings. He even more vehemently valued scientific reason and evidence and was known to say that extraordinary claims—even if they support your most wished-for dreams—require extraordinary evidence. Given his brand of skepticism, one would hope that he would be pleased about the latest tools we’ve built to determine if we are indeed alone. In the 1997 film Contact, based on the 1985 science-fiction novel written by Sagan about the discovery of an extraterrestrial radio signal, the main character, astronomer Ellie Arroway, says, “The universe is a pretty big place … so if it’s just us, it seems like an awful waste of space.”

This article was originally published with the title "Are We Alone?" in SA Special Editions 31, 4s, 1 (August 2022)

Why Did Flu Season Start So Early This Year? 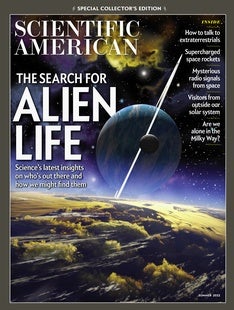