In this hubble space telescope image, the galaxies of the giant cluster Abell 2744 appear strewn through space like jewels on black velvet. Their light began its journey to Earth some 3.5 billion years ago, when our biosphere was in its infancy. Despite appearances, the galaxies constitute less than 5 percent of the cluster's total mass, most of which resides in halos of invisible dark matter. There is, in fact, so much mass within this cluster that it behaves as a gravitational lens, warping space to magnify light from even deeper cosmic realms. The thousands of azure arcs and dots that surround the bright galaxies are actually distorted images of much fainter background galaxies, which were Hubble's true quarry in this image. We see them as they were more than 12 billion years ago, shortly after the big bang. They are some of the earliest galaxies ever glimpsed and offer a new window into galactic evolution, as well as a preview of what NASA's James Webb Space Telescope will routinely see after it launches later this decade.

This article was originally published with the title "The Longest View" in SA Special Editions 23, 3s, 112 (August 2014) 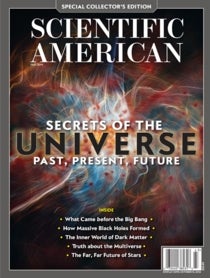