THEY HAVE BEEN part of our collective imagination almost since we began to set down words. Mechanical beings sparked to life in the myths of ancient Greece, the Middle East, China and the Nordic countries. Today we call them robots—from robota, meaning “drudgery” or “hard work” in Czech and related languages. As that name implies, so far these useful machines have been limited in their applications to the sorts of repetitive tasks best suited to automatons—tirelessly turning screw after screw in a factory assembly line, for instance.

Now robots are beginning to enter our lives in much more personal ways. Already robo-vacuums such as the Roomba are easing housework, and digital pets such as Tamagotchis and the e-dog Aibo are serving as electronic companions. Experts envision far more in the short years ahead. Bill Gates writes in his feature article “A Robot in Every Home,” starting on page 4, of nothing less than a transformation of domestic life. It is only a matter of time. After all, he adds: “Some of the world's best minds are trying to solve the toughest problems of robotics, such as visual recognition, navigation and machine learning.” Two million personal robots were in use worldwide in 2004, and seven million more will be installed by this year, according to one estimate.

To expand further, they will require adaptive, complex processors, as Hans Moravec describes in “Rise of the Robots,” beginning on page 12. By 2050 robot “brains” that execute 100 trillion instructions per second will start to rival human intelligence. Robots will also need to become more physically flexible and adaptable. In “Artificial Muscles,” Steven Ashley describes springy polymers that could even produce power with movement. Turn to page 64.

At the same time that robots will be acquiring more human attributes, people will be adopting electronic implants to improve skills such as memory, according to “The Coming Merging of Mind and Machine,” by Ray Kurzweil, starting on page 20. We will also be using the power of thought to direct machines, say Miguel A. L. Nicolelis and John K. Chapin in “Controlling Robots with the Mind”; turn to page 72. Indeed, the differences between maker and creation grow less distinct all the time.

This article was originally published with the title "Aye, Robot" in SA Special Editions 18, 1s, 1 (February 2008) 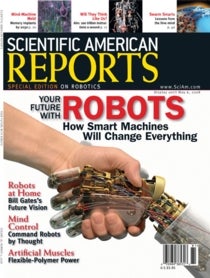