A fascinating study was published in 2015 showing that in cultures with higher rates of immigration, its citizens tended to smile more. Presumably among people who speak an array of languages, nonverbal communication is more crucial for everyone to understand one another and get along. The U.S., with 83 “source countries” populating its communities, scored far higher on this scale of emotional expressiveness than, for example, China, whose population is more homogeneous. Of course, many social factors play into how humans show their emotions through their facial gestures, as psychology professor Lisa Feldman Barrett writes in this issue (see “Darwin Was Wrong: Your Facial Expressions Do Not Reveal Your Emotions”). Perhaps as an American, I’m biased toward smiling faces, but it makes me grin to think about this happy by-product of our country’s diversity.

Elsewhere in this edition, writer Lydia Denworth reports on a new study from the Journal of Beatles Studies (yes, one exists) that explores the role of luck in finding fame and success (see “Can’t Buy Me Luck: The Role of Serendipity in the Beatles’ Success”). As the study author tells Denworth, when it comes to achieving greatness for any of us, “something like lightning might strike, which can bring a smile to the face on a tough morning.”

This article was originally published with the title "Behind Every Smile" in SA Mind 33, 4, (July 2022) 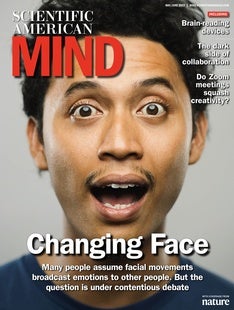