Would you rather work for an aggressive jerk or a spineless wimp? Unsurprisingly, employees do not like either management style. Instead a good manager has to walk the line between too assertive and not assertive enough.

Social psychologist Daniel R. Ames of Columbia Business School and organizational behavior expert Francis J. Flynn of Stanford University were curious about why previous leadership studies rarely had much to say about assertiveness. It seemed unlikely that assertiveness did not matter. What they found is that assertiveness only seems obvious when you get it wrong. “People don’t get credit for getting assertiveness just right. They definitely get criticism when they get it wrong on either side,” Ames says.

Ames and Flynn reached the conclusion after surveying business students about the strengths and weaknesses of former colleagues and bosses. Assertiveness was rarely mentioned when listing positive qualities. It tended to show up only on the negatives list and then as one extreme or another.

A boss who is too assertive steps on toes and hurts feelings. Morale among his employees goes down. They do poor work and eventually leave.

But why would an employee complain about a nonassertive boss? The problem is that a boss who is not assertive might not make co-workers pull their weight or might not get the resources his or her team needs to do its job.

Assertiveness matters to more than just a manager's underlings. Both overassertive and underassertive managers are less effective, and over time they are likely to find that their careers are being derailed, Ames says.

This article was originally published with the title "Being Perfectly Bossy" in SA Mind 18, 2, 10 (April 2007)

Kurt Kleiner is a science writer living in Toronto. 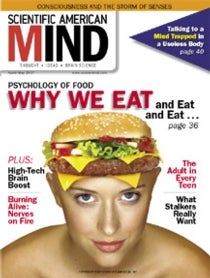