Ashley grimaces. She really wants to spit out the vegetables she has just put in her mouth--they are horribly bitter. But politeness forbids. After all, the man from Cameroon and his wife have invited her to their home for dinner. And strangely, her hosts seem to be savoring the spinachlike ndole, a favorite from their homeland, which can be found in some specialty stores under the name bitterleaf.

Thats certainly the right name, Ashley has just discovered. But how can the experience be so different for her? Because the way individuals perceive flavors is determined not only by cultural familiarity but by molecular biology as well. Researchers are finding that genes activate very different sensitivities in each persons set of taste buds. Ultimately these reactions are responsible for the tastes we perceive in our brains, especially bitterness. As scientists learn more, executives at food manufacturing companies are experimenting with special compounds that could cover up unpleasant flavors that turn some people off healthful foods. And pharmaceutical manufacturers are testing such bitter blockers to make a range of medicines more palatable.

Scientific examination into our sense of taste began in earnest in 1931, after a mishap at a DuPont laboratory in Wilmington, Del. Chemist Arthur Fox had just synthesized a substance named phenylthiocarbamide (PTC) when the powdery material was swirled into the air by a gust of wind. His colleague, who got a bit of the powder in his mouth when he inhaled, complained about its awful pungency. Fox, however, did not experience any offensive sensation. He immediately tested his compound on other lab hands; some of them described PTC as mildly or extremely bitter, and others said it was tasteless.

About 60 years after Foxs incident, Linda Bartoshuk of Yale University determined that around 25 percent of men and women belong to the PTC nontasters group. Another 25 percent react intensely to both PTC and a related chemical called PROP (6-n-propylthiouracil). These sensitive individuals respond more strongly to all four basic tastes--sweet, sour, salty and bitter. Investigators have also found that the same people are sensitive to the proposed fifth fundamental taste, umami, demonstrated in recent years. (The term is a Japanese word, meaning meaty and hearty, a sensation typical of high-protein foods.)

Studies of these supertasters in the past few years have elucidated how we taste and why the same food that is deplorable to individuals such as Ashley can be delectable to her hosts. Painting a tongue with methylene blue dye stains most of it blue, leaving tiny pink dots--the taste papillae in which the taste buds reside. Although an average tongue contains 100 to 200 of the little knobs per square centimeter, supertasters may have twice as many, with individual papillae merging into one another. Nontasters have half the normal number of papillae, but each one is much larger. Supertasters live in a neon taste world, and nontasters live in a pastel taste world, Bartoshuk says.

But the number of papillae only partly determines whether someone might want to spit out a bite of ndole. Which flavors we detect strongly, and how extreme they seem to us, depends above all on the molecular biology of our taste receptors. Some years ago researchers identified the first genes that code for bitter receptors, among them the ones that detect PTC and PROP. Soon thereafter, Un-Kyung Kim and his colleagues at the National Institute on Deafness and Other Communication Disorders discovered that several variants existed and were correlated with supertasters and nontasters.

Experts have since tried an assortment of techniques to further define our taste apparatus. Bernd Bufe and Wolfgang Meyerhof of the German Institute of Human Nutrition in Potsdam created an artificial tongue--a group of specially prepared taste bud cells in a petri dish. When the cells were stimulated with bitters, substances would be bound by the buds receptors and calcium levels inside the cells would rise, indicating the degree of perception.

Separate results from the Human Genome Project indicate that 25 genes are responsible for encoding receptors that detect bitter flavors, according to Bufe. Different receptor molecules detect different categories of substances. For example, the PTC/PROP receptor, known as TAS2R38, binds only to molecules related to PTC and PROP, which are found abundantly in broccoli, cabbage and other cruciferous plants. On the other hand, TAS2R16 specializes in the so-called glucopyranosides--which include substances that contain cyanide--such as those found in bitter almonds. Other receptors seem to be less selective, reacting to several classes of substances.

Bufe notes that because variations exist for all 25 bitter genes, scientists are now aware of 104 different receptor types for such compounds. Our sense of bitter is therefore highly refined and very individual.

Our perception of bitterness is much more robust than it is for the other tastes. Some evolutionary biologists say that is because bitterness has long been a vital warning signal, causing us to immediately spit out anything that tastes horrible. For example, strychnine, found in plants belonging to the gentian family, activates such receptors. Early humans who better discriminated among acrid substances would have had a survival advantage as they continued to discover potential new foods.

In July 2005 Bufe and Nicole Soranzo of University College London published evidence for this thesis. They investigated the genetic variability of the TAS2R16 receptor among 997 people from 60 different parts of the world. The data showed that 98 percent of people outside of Africa possess a version of the receptor that makes them extremely sensitive to the bitter substances in the glucopyranoside family. This genetic variant arose at least 80,000 years ago and possibly as long as 800,000 years ago.

A less sensitive, earlier version of the receptor was found among 14 percent of Africans. Did this variant represent the survivors of a population that remained after the more sensitive mutation arose? Perhaps. But Bufe and Soranzo offer another explanation: that less sensitive receptors would allow consumption of small amounts of substances containing cyanide, which, once metabolized, could in turn provide enhanced defense against malaria. Maps illustrate that most of the people who have the old receptor live precisely in regions where malaria is traditionally most severe. Other genes conferring resistance to malaria are also widespread in the same areas.

For everyone else, it is apparently an advantage to detect even small quantities of bitters. The glucopyranosides include substances that release toxic cyanide when metabolized, such as amygdalin in bitter almonds or linamarin in manioc. Even a single dose of one milligram of cyanide per kilogram of body weight is lethal for most mammals. A slight change in the genes for the TAS2R16 receptor must have had a significant influence on feeding behavior, survival chances and the spread of the human species.

What was useful to early Homo sapiens can be a problem for folks in the 21st century, however. People who are unusually sensitive to pungent substances often avoid nutritious vegetables such as broccoli because of their taste. Nutritionists want to know how much these choices affect the health of individuals and whether it would be advisable for such people to use custom food additives to improve taste and thus nutrition. Food manufacturers have vested interests, too; today they often add large quantities of sweeteners to products such as cola to override the bitterness of the caffeine. A bitter blocker could simply turn off consumers relevant taste buds, and the products could be made and promoted as low in calories.

Linguagen Corporation, a small biotech firm in Cranbury, N.J., has already developed such a bitter blocker: adenosine monophosphate (AMP). The company says the nucleotide, which is produced naturally by the body and found in many living cells, suppresses the bitterness sensation without any side effects. AMP apparently does not act directly on taste bud receptors but seems to interfere with the signal from the taste cells to the nerve fibers that subsequently head toward the brain. Although Linguagens researchers have not defined the mechanism exactly, technical director Richard McGregor says that company researchers believe AMP interacts with a molecule in the cell membrane to hinder signal transmission. Linguagen is searching for other blockers as well.

The U.S. Food and Drug Administration approved AMP in September 2004, but it remains to be seen if Linguagens bitter blocker will succeed in commercial food production as it did in the lab. Some critics observe that the compound has a taste of its own, in the umami category, that is somewhat reminiscent of beef broth. That quality may make it undesirable for sweets or soda. Other skeptics are wary of bitter blockers on general terms. Widespread use could possibly undermine a natural, protective function; our tongues receptors might become dulled to toxic substances or spoiled foods. Such additives might also make it easier for companies to manufacture and to market low-quality foods.

The pharmaceutical industry is equally interested in new substances that could mask unpleasant flavors. Our detectors react strongly to many medications. The TAS2R16 receptor often recoils from acetylsalicylic acid--the active ingredient in aspirin. Flavor-optimized drugs would be especially valuable for treating children, who often refuse to swallow nasty-tasting pills and syrups. And chronically ill people such as AIDS patients, who have to force down many unpleasant tablets daily, would greatly appreciate more agreeable formulations.

McGregor points out that AMP is not strong enough to completely suppress the concentrated bitterness of many drugs, and he acknowledges that the substance alters a users sense of taste for a range of chemicals--including the hops flavor of a microbrew drunk with dinner or the pleasant bite of dark chocolate for dessert. Finding more ideal bitter blockers--whether for drugs or delicacies--will therefore require further basic research. Bufe says precise structural analyses of bitter chemicals and where they bind to various receptors should lead to molecules that can temporarily blind our tongues to very specific substances in a particular drug or food, instead of blocking the detection of everything bitter. Many hours of work are still needed, however, before it becomes easier to swallow a bitter pill.

STEFANIE REINBERGER has a biology degree and is a freelance science writer in Heidelberg, Germany. 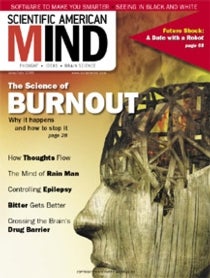