In July the Internet exploded with a photo of schoolchildren. The kids, dressed in dark shorts and colorful T-shirts, appear to be enjoying a field trip, perhaps to a zoo or a nature preserve. In the center of the image, a crouching girl in a yellow T-shirt holds a medium-sized turtle toward an adult taking a picture of the scene. Smiling classmates, dressed in matching white, green, red and blue T-shirts, gather around the girl and turtle. At first sight, nothing seems amiss in the group shot. But a closer examination reveals that the many hues in the background and the children’s clothing are not real colors. The seemingly polychromatic image is actually black-and-white, overlaid with a thin multicolored grid.

Dubbed the “color assimilation grid illusion” by its creator, digital media artist and software developer Øyvind Kolås, the artifice is related to other visual effects evoking illusory tints, such as the Munker illusion, neon color spreading and the watercolor illusion. Such colorful deceptions occur because our brain’s visual system processes color at much lower resolution than it does shape.

Pastel and watercolor painters from Cezanne to Picasso have taken advantage of our coarse color perception to do away with coloring inside the lines. Instead artists often apply pigment to objects and people in a vague, imprecise way, without paying much mind to depicted boundaries. The visual brain, unfazed, assigns the correct colors to the relevant shapes, and observers are none the wiser.

The crisscrossing grid in the original image is not critical to the misperception. Neither is the particular image that went viral. Kolås has shown similar effects with many other grayscale pictures, by virtue of superimposing on them colored lines, polka dots and even text. The images in this column illustrate how a delicate chromatic grid, overlaid on a black-and-white photo of two eastern rosellas (Australian parakeets), restores the birds’ dazzling tones to our perception.

Blurring one’s vision makes the illusion even more striking, by further reducing the quality of the visual system’s color processing. To achieve maximum illusive pigmentation of the above photo, try squinting your eyes, removing your glasses or spying the birds out of the corner of your eye.

Last Month Was among the Hottest Julys Ever Recorded 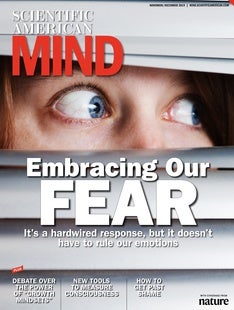