To the Editor of the Scientific American : My attention has been called to an article in a recent number of the Scientific American concerning the late Sylvanus Sawyer. No mention is made of his connection with his brothers Joseph and Addison. While I would not detract from his prominence as an inventor, no account can properly be given of him that does not include them, one or both of whom were always associated with him in business in the old "gun " days, and were also inventors in those lines. Addison invented a combination shell used in the iate war', a combination fuse, and other ordnance articles, upon which he obtained patents. He also invented the " Sawyer canister," which was adopted by the government, and for which he was awarded $25,000. Concerning the rattan business, Addison's invelltion, the "tubular spurred cutter" for utilizing rattall pith, patented by him in 1854, revolutionized the rattan industry of the world. They were three remarkable men, sprung from a race of ingenions mechanics. Granting the honor due his brothers will not lower the rank of S"lvallus Sawyer among the inventors of his time. Allow me to make a eorrection. Sylvanus Sawyer died at his home in Fitchburg, Mass., uot "Templl'-ton," where he had long be?n identified ; also that he was the Ron of John and L icy (Balcom) Sawyer, instead of " Malcom J." Malty E. Sawyer. Boston, Mass., No\'ember 25, 1895. Electric Power ill New York {ity. The Electrical Engineer says that on January 1, 1395, the Edison Eleetric Illuminating Company hact connected 7,615 horse power of electric motors, but at the end of O('tober it had no less than 11,263 horse power, an increase of 3,648 horse power in the shpl't period of ten months, The horse power capacity thus conneeted includes, it would seem, a great many of the fan motors, but not all, as it is becoming a common practice for people to plug the small motors into lamp sockets without fuss or notice, and, of course, these do not appear on the returns. The company has 251,487 incandescent lamps connected and 3,280 arcs. This would figure out ill the neighborhood of 25,000 horse power, so that one-third of the company's total connected capacity is now representpd by motors. This is a notable showing for power uses of current. We estimated that wherea" in the census year, 1890, the motors averaged about 1 horse power each, they might now reaeh 5 horse power. Mr. Lieb informs us that the motors average between 5 and 10 horse power, and that one of the motors in regular service on the mains has a rated capacity of 40 horse power. It is evident that the stationary motor industry must be increasing at a rapid rate, for these figures, large as they an', take no account of other stations than the Edison, and do not include isolated plants, many of which are heavily loaded with motor duty in running pumps, elevators, ventilators, etc. ..- The Preparation of 'Vool for Underclothing. The method of preparation consists in soaking tli pure, unsulphured, undyed wool in the extract described below. Bark, taken from the stem and roots of the Daphne mezereulIl, a tree growing in the northern regions of Europe, after being dried in the air for rather less than a year, is Cllt up finely and placed in 40 per cent of spirits of wine and 60 percent of water, for gix days, in the proportion of one part of bark to four parts of the mixture. In this time, the spirits of wine dmws out of the bark resin, oil, daphnine, wax, etc., and a brownish mass results. After straining it off from the macerated bark, the extract is put iuto a copper vessel of sueh a shape and size as is snitable and convenient, then heated to 35 Reaumur, and the wool in a completely loose condition, w that the extract may reach and act on all the fibers, is placpd therein, and kept for three hours at this temperature, whereby it is illlpregnated with the alcoholized extract. After this time, the wool is taken out of the vessel and dried on wide meshed hurdles ; it can then be spun and woven. The patentee claims that, during wear, the wool prepared hy this method remains generally odorles! and possesses au unsurpassable suppleness and softness, as well as a peculiar absorptive activity on the humors and perspiration of the body, which are therefore drawn to the outside of the texture, caming the body to keep dry ; that the wool loses its natural harshness and the prepared material does not irritate the body, and that the single fibers bel'ome exceedingly elastic, porous, more capable of absorption and shrink no more, so that the properties beneficial to the human body are never lost, even by washing, clean ing and thorough airing of the stuff.

This article was originally published with the title "Correspondence" in Scientific American 73, 25, 391 (December 1895) 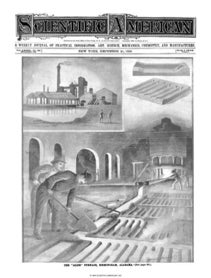