On this past Christmas Day, NASA scientists and engineers cheered and breathed a cautious sigh of relief for the first time in, likely, years. The James Webb Space Telescope launch had gone off successfully, after years of delay, budget overages and technical challenges. In the ensuing weeks, the anxiety has kept up a steady hum while the telescope performed crucial early mission tasks to get itself situated to start collecting data—namely, unfurling its sunshield and mirrors. Read Alexandra Witze’s update outlining these accomplishments. The telescope’s operators are far from relaxing, but each mission milestone marks the start of a new era of astronomy, as Richard Panek reports in this issue (see “The James Webb Space Telescope Has Launched: Now Comes the Hard Part”).

NASA has another exciting mission underway: the Double Asteroid Redirection Test (DART). Designed as part of our planetary defense plan (see “NASA’s DART Mission Could Help Cancel an Asteroid Apocalypse”), a test spacecraft launched at the end of last November and will smash into its target sometime in the fall of 2023. I anticipate many months of thrilling anxiety for NASA scientists. If all goes well, the payoffs will be cosmic.

This article was originally published with the title "Cosmic-Level Anxiety" in SA Space & Physics 5, 1, (February 2022) 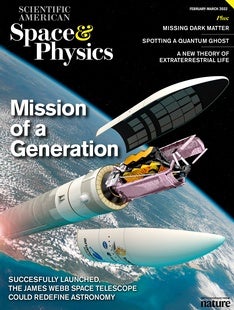