The numerous accidents which occur from the indiscriminate use of matches, and the slight nature of the boxes in which they are usually kept, has induced J. B. Creamer, of New York, to invent a metallic match safe which will deliver only one at a time, and thus in some measure act as a preventive to fires. It was patented January 12, 1858. By referring to the accompanying engravings, of which Fig. 1 is a perspective view, showing that it is ornamental as well as useful, and Fig. 2 is a section, it will be thoroughly understood. It is made in two parts, A being one, which is a box having an inclined platform, a, bn to which the matches drop and roll out of the safe when released one at a time from it by the cylinder, E, whose handle is seen in Fig. 1. This cylinder has in it two grooves, e, each of which will con tain one match, and as they are contained between the inclined plates, D, each half revolution of E carries one match from the safe to the inclined platform, a, from which they can be taken off. The front and top are cast together, as seen at B, and they are hinged to A at e ; they are also provided with a catch, 6, that holds them securely in their proper place to close the safe. When there are no matches in D a little lover (seen in Fig. 1) is depressed, and b is released. B is then folded back, and the safe is closed. When a match is required, the handle, E, Fig. 1, is turned half round, and one drops out. It is, as its name implies, safe, and cannot fail to be far preferable to the dangerous and clumsy boxes now in use, although the round matches only ean be used in it. Further information may be obtained from Messrs. Humphrey &Creamer, 37 Lispenard street, New York.

This article was originally published with the title "Creamer's Match Safe" in Scientific American 13, 28, 224 (March 1858) 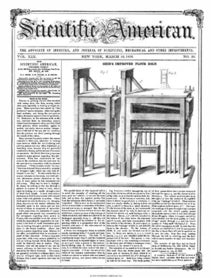