U. S. PATENT OFFICE, April 20, 1869. In the matter of the application of Jason Crane for a patent for a desiqn for a fur-set box. On appeal to the Commissioner of Patents. The applicant designed a paper box, with compartments conveniently arranged for holding each of the articles composing a lady's set of furs. It is neat in appearance, as well as convenient in use, and has commanded a preference in the market over other boxes for that purpose. It was at first claimed that the new arrangement of the compartments was the proper subject of a general patent. This was denied by tin office on the ground that, although skill and good taste had been displayed in designing the article, it did not come up to what might properly be termed " a new invention." A more limited patent is now asked for, to wit, for the design; and the question is presented, whether the case conies within the statute relating to design patents. The construction which has been given to that act by the Office, ever since its passage ir. 1842, is, that it relates to designs for ornament merely something of an artistic character,as contra-distinguished to those of convenience or utility. It was upon this view of the statute that the application was rejected by the Examiner in charge and, on appeal, by the Board of Examiners-in-Chief. No judicial construction has as yet been given to this part of the act. Considerable reflection upon the subject has satisfied me that the objects and int. nt of the statute extend beyond the limit assigned to it by the Office. It provides, among other things, that any citizen, " who, by his industry, genius, effort, and expense, may have invented or produced any new and original design for a manufacture "or. . " any new and original shape or configuration of any article of manufacture" may obtain a patent therefor. It does not say " ornamental " " design" or " artistic " shape or configuration, an i I am unable to perceive any good reasons why designs for utility are not fairly or properly embraced within the statute as well as those relating to orname itatip-n merely. The line of distinction between what is useful Tnd what is merely ornamental, is, in some cases, very indefinite. Bfsome it is said that any form or design that is most useful is also most pleasing. It would be impossible, in the view of such persons, to make any improvement in utility that did not at the same time add to the ornamental and artistic. 1 can perceive no necessity for the distinction. Thefe is a large class of improvements in manufactured articles that are not regarded as new inventions or as coming within the scope of general patent laws. They add to the market value and salability of such articles, and often result from the exercise of much labor, genius, and expense. They promote tlie best interests of the country as well as the creations of inventive talent. It seems to me to have been the intent of Congress to extend to all such cases aiimited protection and encouragement. Whenever there shall be produced by exercise of industry, genius, effort, and expense, any new and original design, form, configuration or arrangement of a manufactured article, it comes witnin the provisions and objects of the Act creating design patents, whatever be its nature, and whether made for ornament merely or intended to promote convenience and The construction given to the statute by the Board of Appeals seems to me to be erroneous, and I accordingly overrule their decision. EJLISHA FOOTE, Commissioner.

This article was originally published with the title "Decision of the Commissioner of Patents on Design Applications" in Scientific American 20, 21, 331 (May 1869) 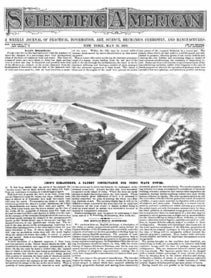