After more than 20 years as a professional paleontologist, I know how lucky I am to spend my days studying dinosaurs. In times when so many people can barely afford the basic necessities, how can I possibly justify using taxpayers' money to study animals that vanished millions of years ago? What can they teach us about today's world? Aren't they irrelevant to modern-day problems?

The truth is, paleontology is anything but irrelevant. The fossil record tells us that climate change is the planet's “normal” state. Does that mean the change we're seeing now is normal, or is the climate behaving in new ways because of human influence? How do we offset the damage we may have caused?

The best way to look ahead is to look behind, at those organisms, including dinosaurs, that survived extended climate change. The fossil record helps us compare today's climate changes and people's role in them with long-ago shifts before humans existed. And it has shown us five previous worldwide extinction events that occurred before the human era, enabling us to ask whether human activity is now causing a sixth global die-off. We could never consider such a question without knowledge of the distant past.

More than 99 percent of the species that have ever lived are extinct. Each taxon we recover represents a different set of evolutionary experiments with different outcomes, and most can be studied only via the fossil record. Dinosaurs, among the vertebrates with the most species, offer a particularly rich field. A single dinosaurian lineage—the extant birds, with roughly 10,000 species—far outnumbers the 5,500 or so species of living mammals.

Occupying a temporal span of more than 200 million years and a geographical range that includes every continent and virtually every niche, dinosaurs have much to teach us. No other terrestrial vertebrates have ever remotely approached the great size of the sauropods, nor have they achieved the food-processing efficiency of the hadrosaurs, which had vertically stacked teeth that were replaced as they wore out. And we can only speculate on the diversity of flight ability among extinct avian dinosaurs such as the enantiornithines and the enigmatic, four-winged microraptors, with flight feathers not only on their forelimbs but also on their legs. The fossil record exhibits for us what is possible for vertebrate organisms, both in niche occupation and in biomechanical and morphological adaptations to these niches.

There is another, no less important reason to study dinosaurs: they fascinate even nonscientists. We can use this fascination to encourage young people to enter the sciences, at a time when that is more important than ever.

Engaging future researchers isn't the only way paleontology might energize other sciences. We are just beginning to decode the molecular information hidden in the fossil record. It's tricky: molecules recovered from fossils inevitably have been modified from their living state. But techniques for cracking the code might be useful in medicine, for example.

Even now we are losing irreplaceable data. When fossils aren't recovered properly, their scientific value is diminished. It's a dilemma: for farmers in rural China or nomads in Mongolia—even for ranchers in the dry, bleak High Plains of the U.S.—fossil finds can help pay for their children's education, put food on the table or warm their homes in winter. But the fossil finders seldom know or follow proper recovery methods.

It's not their fault. To be sure, greedy middlemen and wealthy buyers are part of the problem. But so is ignorance. Scientists need to take a more active role in educating the public—explaining why proper recovery of fossil material is so important. And we need tougher laws to deter illegal trafficking.

Scientists have a responsibility to raise awareness of the value of fossils—not just as collectibles but for the lessons we have yet to learn from the creatures that once walked this planet. Only by understanding the geologic record of diversity, adaptation and climate variability can we hope to face the challenges ahead.

This article was originally published with the title "Why Dinosaurs Are Important" in SA Special Editions 23, 2s, 112 (May 2014)

Mary H. Schweitzer is a professor in the departments of marine, earth and atmospheric sciences and of biological sciences at North Carolina State University and curator of vertebrate paleontology at the North Carolina Museum of Natural Sciences.

What Color Were Dinosaurs? [Video] 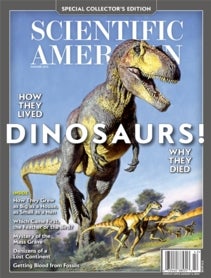