The Society of the Red Cross in Europe has, for several years, given particular attention to the subject of portable field hospitals and other improved appliances for the care, of sick and wounded soldiers. Though the more humane method of settling international differences by arbitration is appealing each year with increasing eamestnessto the conscience of Christendom, there js stjll immense field for the ministrations of those who seek the aonsel'yation of life in the miclfst of its military destroyers. Despite the deadliness of modern instrumentsbf warfare, it is conceded' that a greater proportion of soldiers die from lack of sufficient care and from eaposure than frorn the immediate effects of the

This article was originally published with the title "Ducker's Portable Barrack and Field Hospital" in Scientific American 54, 26, 399 (June 1886) 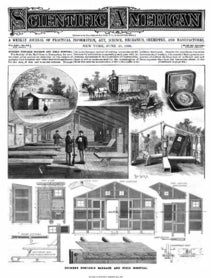