"WHAT IS DOING TO THE ERICSSON.—This fine ship laysat her dock foot of North Eighth *t, Williamsburgh, preparing to undergo extensive alterations and improvements in her machinery. A temporary shed has been constructed near her dock, wherein to stow her machinery, most of which is to be taken out, in order to facilitate the improvements. In removing the machinery it will be necessary to displace a portion of her deck.— Workmen were yesterday engaged in taking out the ashes and brick from her furnaces, c. To-day it is expected this job will be completed, when the work of removing the machinery will be prosecuted with earnestness. Several months yet must necessarily elapse before she will be ready for her destined voyage to Europe." This extract is taken from the New York Daily Times of the 18th inst When we have presented any information respecting new repairs or alterations making in the hot air ship, we have quoted the same from some paper (like the above) which had previously proclaimed the complete success of the Ericsson. It is not that we are not as well, or even better informed about what is going on in the Ericsson, than any paper in our city, that we make extracts like the above from our daily papers, but because we wish to corroborate all;we have said about the lailure of this ship, by giving the testimony of such journals as most lauded the new power at first, and who made bold to assert that " the days of steam were ended." We cannottellwhatmaybe affected by alterations of which we know nothing; we have spoken about what we know has taken place. Nothing would have given us greater pleasure than to have been able to say, " hot air is superior to steam power," as we welcome every improvement. We have received a number of letters from various places, in which Prof. Rainy has lectured on the Ericsson, informing us that on every occasion he tookthe liberty to misrepresent us. We keep a record of his sayings and bide the proper time to use them. We cannot believe that the gentlemen connected with the Ericsson have anything to do with his itinerancy, and they are therefore not responsible for his statements. To PREVENT INCRUSTATIONS IH BOILERS. —To persons having the care of steam engines the following from the " Lawrenceburg Register," may be valuable:—" Mr. Ira Hill has informed us that he has accidentally made a valuable discovery, by which the deposition of lime upon steam boilers maybe obviated. Two or three shovels of saw-dust are thrown into the boiler; after which process he states he never had any difficulty from lime, although using water strongly impregnated with it. He has always found the inside of his boiler as smooth as if just oiled. Whether the lime attaches itself to the floating particles of saw-dust, instead of the boiler, or whether the tanic acid in the oak saw-dust forms a salt with the lime, which will not attach itself to iron, remains to be explained. The saw-dust was placed in the boiler tor the purpose of stopping a leak. The experiment is cheap and easily tried. [Saw-dust is not a new discovery for the prevention of incrustations in steam boilers.— In 1846 a patent was obtained for the use of mahogany saw dust to prevent incrustations m boilers; exhausted tan bark and dye woods have also been used for the same purpose.— Blocks and chips of oak wood have also been used, and our constant readers are perfectly familiar with these facts, as saw-dust is described on page 397, Vol. 3, Scientific American, as being applied for this purpose. If Mr. Hill will refer to said page he will find this mentioned, but the discovery may be new to him. A NEW PROPELLER.—A beautiful propeller named the Vequero, has been built in this city for the coast trade of Cuba. The hull was built and modelled by George Steers, the designer of the yacht America. It is of unsurpassed symmetry and beauty. Her total length is 151 feet; depth of hold 10 feet; breadth of beam, 24 feet inches; and is driven by a pair of oscillating engines; cylinders, 26 inches diameter; length of stroke, 28 inches; diameter of propeller, 8 feet; pitch, 10 and 11 feet; geared, 2j to 1; draft, 9 feet consumption of fuel, 5 tons per twenty-four hours; burthen,340 tons, carpenter's measurement. The engines, by S. H. and E. Farron are of great efficiency and perfection. This vessel on her trial trip last week made 16 miles per hour with her sails set.

This article was originally published with the title "Events of the Week" in Scientific American 8, 37, 294 (May 1853) 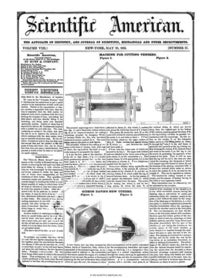