C D Seropyan, of New Haven, Conn, has secured a patent in England for a mode of preparing bank notes, bills of exchange and other papers, to prevent counterfeiting by photography and its kindred processes, by using two or more colors, which do not reflect nor transmit, but absorb the chemical rays of light, one of which shall be so applied to the paper as to cover the surface with a tint of a red or a yellow shade of color, while an ink of a different color from the surface tint shall be used for printing the other parts of the note, that is, the obligatory and ornamental parts of the said surface Where this mode of preparing notes is observed, counterfeiting by photographic or kindred means cannot be effected; for so long as the tint or ground and the vignettes and lettering remain together, a distinct impression of the latter cannot be obtained sufficiently clear and distinct to answer the purpose of the counterfeiter, because both the colors neither transmit nor reflect, but absorb, the chemical rays or jht FOWEKS, THE SCDLPTORWe observe that our distinguished countryman, Powsrs, has secured another patent in England for a machine for punching, stamping, or cutting metals or other substances, in which the tool can be changed very quickly, and the whole machine can be taken to pieces and readju=ted with great expedition Like the singularly and novel formed rasps he invented a few years since, it appears to be simple in construction and admirably adapted to the purposes for which it is designed ANOTHER AMERICAN TELEGRAPHThere is a project on foot at St Petersburg for establishing a strictly overland telegraphic company with North America The plan has been presented to the government by a Belgian engineer, and consists in carrying a telegraphic line by Siberia, and to establish a submarine communication between Capes East and Prince of Wales, then to join the lines to those of the United States through the territories of Russia, and England THE LEVIATHANSome idea of the immense magnitude of this monster steamer may be formed from the fact that the mere cost of completing her for sea, putting on board stores, c, and fitting her for the trip she is expected to make to Portland, Maine, the coming summer, will amount to the enormous amount of $600,000 No less than ten anchors are required to hold her at her present moorings, each with lengths of cable from 40 to 160 fathoms All her masts are to be stayed by iron rope standing rigging of the most massive kind, the shrouds and stays of which are so secured at their ends through iron rings as to enable a single skilful man to cast loose all the fastenings of each mast in five minutes, in the event of disaster, though until the rings are opened, the sides might yield from the ship before the shrouds would yield THE ATLANTIC TELEGRAPHFour hundred miles of new cable are in course of manufacture to supply the loss from the failure of the experiment last year, and 300 additional miles which it has been resolved should be provided, so as to allow greater length of slack than was originally contemplated The cost for these additional 300 miles is estimated at $180,000 It is generally believed that the plan of joining the cables in mid ocean, instead of starting from either shore, will be resorted to Considerable modifications are being made in the machinery, and experiments are now in progress with a view of making the machinery for paying out as nearly as possible selfacting NEW LUBRICATING MATERIALM Rohrig has discovered a means of removing the acid principles of fat, and thus enabling it to be applied as a lubricator for machinery, without danger of oxydizing the metals with which it comes in contact, besides freeing it from all disagreeable smell and taste, and rendering it to a consistence of castor oil It hardly colors copper, bronze or brass, does not run like olive oil and other thin oils, and is much cheaper than the ordinary lubricating material

This article was originally published with the title "Foreign Summary" in Scientific American 13, 31, 246 (April 1858) 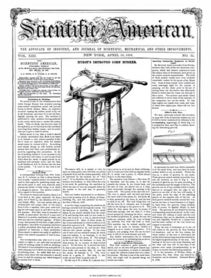