We often regard mathematics with a cold reverence. The discipline is driven by rules and principles that are eternal and stoic. There will never be a finite number of primes, for instance, and the digits of pi will go on forever.*

Beneath that certainty, however, lies a sublime attractiveness. A proof or equation can have an elegant, aesthetic effect. Mathematicians who study group theory, for example, analyze rules governing rotations or reflections. Visually, these transformations can appear as intensely beautiful symmetries, such as the radial patterns of snowflakes.

Some mathematicians and artists see a false choice between math and art. They choose not to choose. They ask questions using the language of numbers and group theory and find answers in metal, plastic, wood and computer screen. They weave, and they sketch, and they build. Many of them exchange ideas every year at the international Bridges conference on math and the arts or meet at the biennial Gathering 4 Gardner, named for Martin Gardner, who wrote the celebrated Mathematical Games column in this magazine for 25 years.

Now interest in math art appears to be blooming, shown by an uptick in exhibitions and even academic journals. Roots of the current wave go back to the end of the 20th century, but artists today call on a wider spectrum of mathematical muses and use more modern tools. Here are a few of the most striking works.

*Editor's Note: (9/10/18): This sentence from the print article was edited after posting to correct an error. The original stated there will never be a countable number of primes. 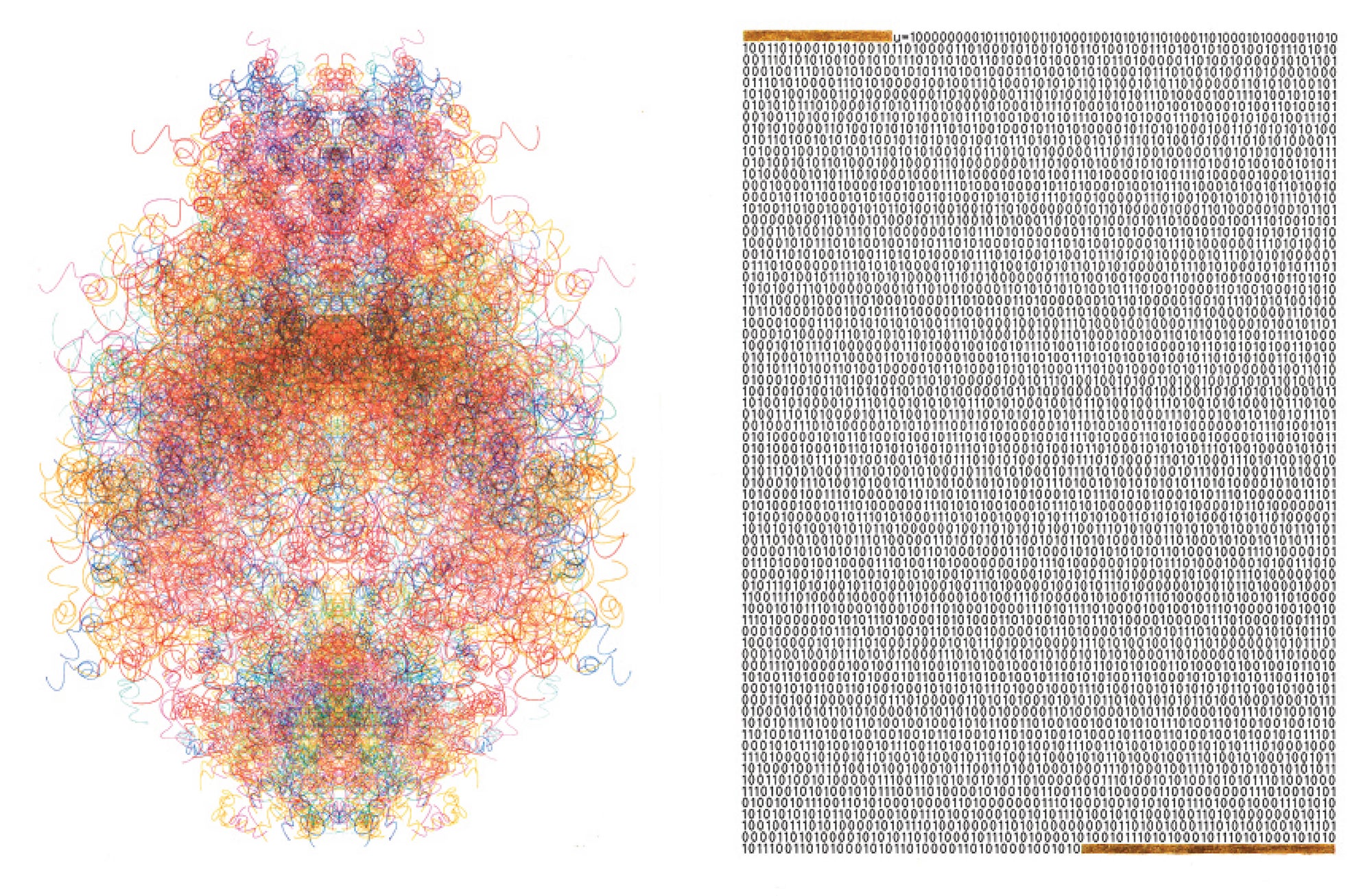 Verostko trained as an artist in the 1940s, became a priest, left the priesthood, got married, dissected computers and learned to code in BASIC. He is a pioneer in algorithmic art, which generates new visions using computer programs, and he uses algorithms to guide the drawing arm of a pen plotter.

He created this piece in 1998 after reading about the universal Turing machine (UTM) in Roger Penrose’s 1989 book The Emperor’s New Mind. The machine is named for computational pioneer Alan Turing, and the universal version is a machine that could emulate the functions of every specialized Turing machine, which means it could theoretically compute anything that could be computed. When Verostko learned about the UTM, he thought of it as a kind of foundational text of our time, a creation that would change culture forever. Through his religious studies, he had long been enamored of illuminated manuscripts—handwritten medieval texts embellished with elaborate illustrations in gold or silver—and decided the UTM was contemporary work that deserved illumination.

This UTM “text” (above) is binary code, a long string of 0s and 1s, the language of computers. As illuminations that evoke the work of medieval scribes, Verostko separately created abstract figures (left), produced with a plotter pen. 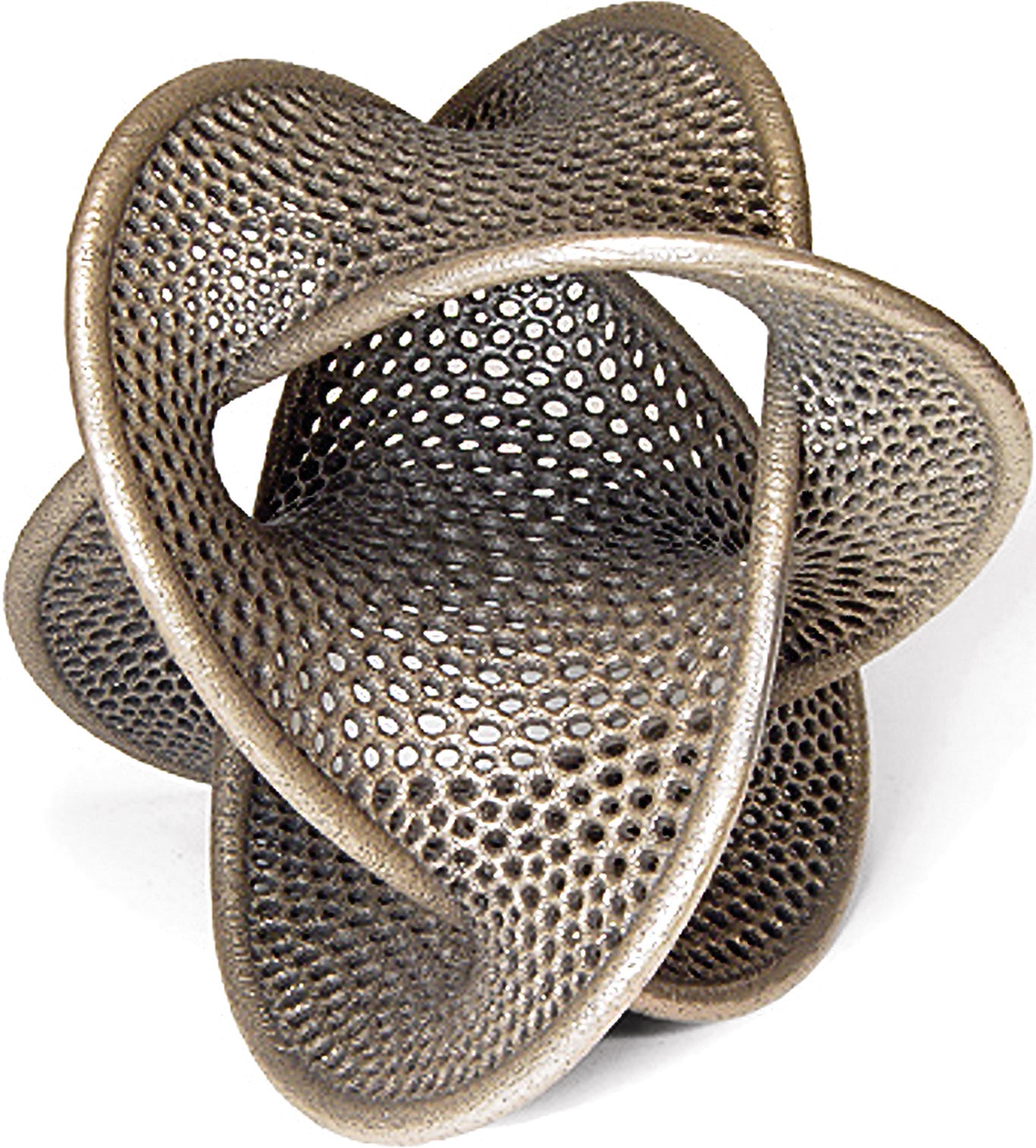 For more than a decade Grossman, who lives near Boston, has been using 3-D printing to forge mathematical sculptures out of metal. She delights in symmetries, impossibilities and the division of space. The three outer rings here do not touch one another but are still inextricably interlinked. If you remove one, the other two can separate. It is an ancient form called Borromean rings that is seen today in the logo of the International Mathematical Union.

The rings are members of a mathematical family of link forms, each member characterized by three closed curves with no two physically connected. Their interactions are of particular interest to mathematicians who work in knot theory. The surface bounded by the Borromean rings is called a Seifert surface.

Grossman’s sculpture is part knot theory and part puzzle. To highlight the curious swoops of the surface, she used a perforated texture that both plays with light and draws attention to the curious topography. 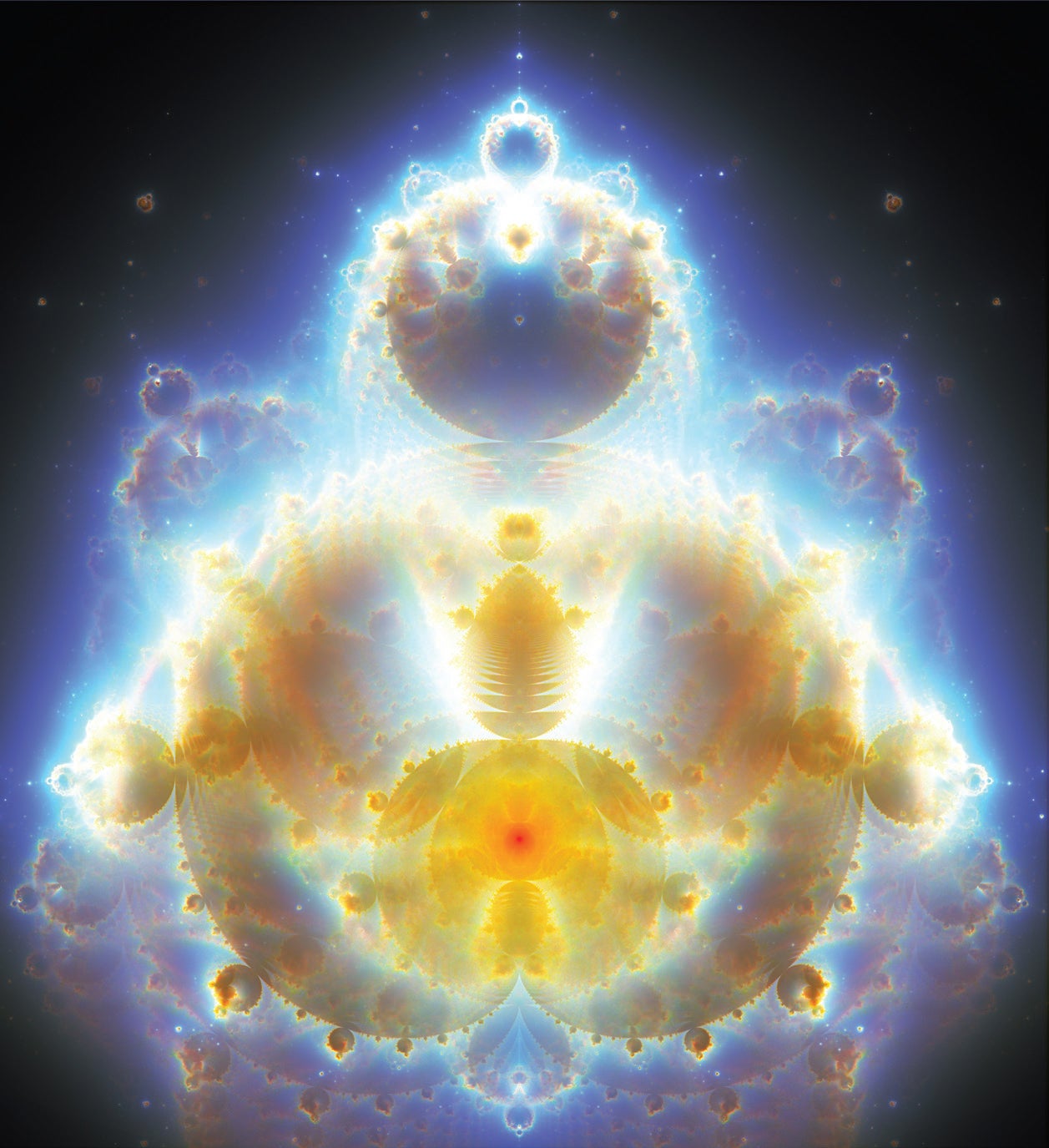 In the late 20th century a pattern called the Mandelbrot set took much of the math and art worlds by storm. It was a fractal set named for Benoit B. Mandelbrot, the late French-American mathematician who was the first to organize fractals into a field worthy of investigation. His 1982 book The Fractal Geometry of Nature remains a classic.

The set starts with a point on a complex plane, represented by a two-dimensional graph, and that point is used as the initial value for a particular equation. After making the appropriate calculations, take the new answer and plug it back into the equation. Repeat. If the answers do not get too large—increasing a bit, decreasing a bit—then the initial point is in the set.

Plots of such sets show telltale shapes that repeat as you zoom in or out. But until the 1990s the Mandelbrot set had a standard appearance that made it look like a big bug, with little bugs scattered around its edges and smaller bugs attached to those bugs.

Green, a computer programmer, did not like the “bug body” look. So she hammered out a program that showed more detail about the way certain points hopscotch around the plane. What appeared on her monitor was spooky. “I don’t know if I literally pinched myself,” she says. The image was a convincing facsimile of the Buddha, and Green revised the code to accentuate different colors. Many mathematicians compare the abstractions of mathematics to spiritual experiences, and Green’s “Buddhabrot” invokes that bridge explicitly. 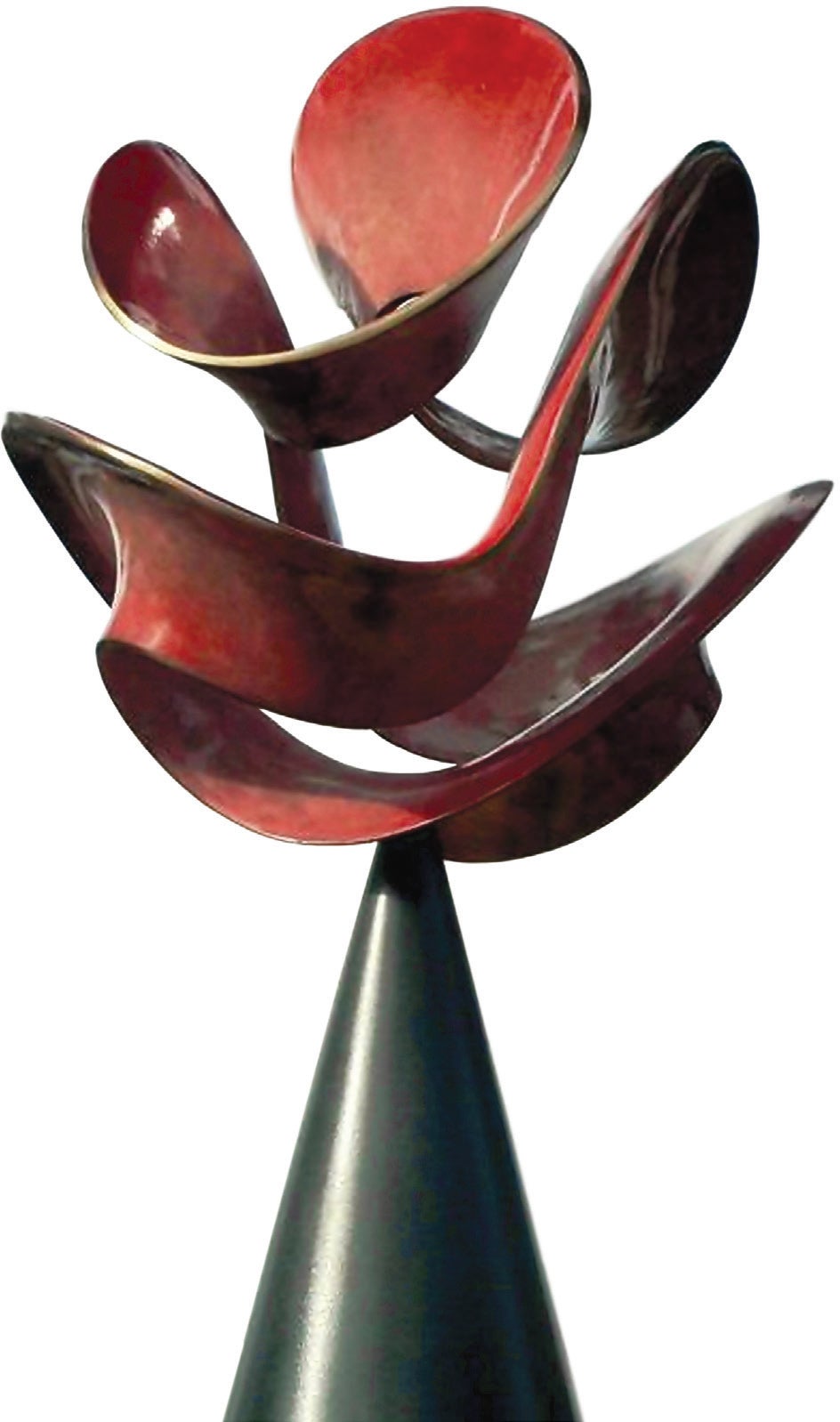 In the math art world, Séquin, a computer scientist at the University of California, Berkeley, is known for making hundreds of pieces that give body to heady ideas about surfaces, twists and dimensions. He has produced a veritable zoo of pieces out of wood, metal and plastic.

This piece, he says, was inspired by the celestial light show that plays out in the skies of the Southern Hemisphere: the Aurora Australis, or Southern Lights. The twisting ribbon of the sculpture invokes the turning ribbons of light. In the sculpture, the ribbon changes from flat to curved to flat again and connects to itself. If you trace the sculpture’s winding path with your finger, you will visit every part of it and wind up back where you started without lifting your finger. The inside surface is also the outside, which makes it a Möbius strip, the simplest known nonorientable surface, which means that you cannot use concepts such as “front” or “back” or “inside out” with it.

According to Séquin, such visuals are not just captivating; they also provide access to heavy mathematical ideas. “It’s a way of getting people who hated math to refocus,” he says. “It’s a way to see math as much, much more than just rote learning.”

Taimina’s adventures in geometric handicrafts began in the 1990s, when the now retired mathematician was teaching a class on hyperbolic geometry, a type of non-Euclidean geometry, at Cornell University. In Euclidean geometry, if you have a line and a point not on the line, there is only one other line that both passes through the point and is parallel to your first line. But in non-Euclidean geometries, there may be many lines that pass through the point and do not intersect the first line. This happens because a hyperbolic plane has constant negative curvature. (The surface of a sphere has constant positive curvature; negative curvature is more like what you would find on a saddle.) As a result, the angles of triangles on hyperbolic planes add up to less than 180 degrees. It is the kind of curvy weirdness that shows up as the frill on the edge of a kale leaf.

Taimina wanted to create tactile models so her students could feel the curvature. Crochet, which she has been practicing almost her entire life, seemed like a good fit. With a crochet hook and yarn, she created a hyperbolic surface using a simple recipe, increasing the number of stitches exponentially. The one shown here takes the form of a pseudosphere, which has negative curvature everywhere.

Since then, Taimina has made dozens of models in an array of colors—the largest weighs about 17 pounds—and can claim invention of “hyperbolic crochet.” Her method for creating dazzling blobs has only one basic step. “It’s very simple,” she says. “Keep constant curvature.” 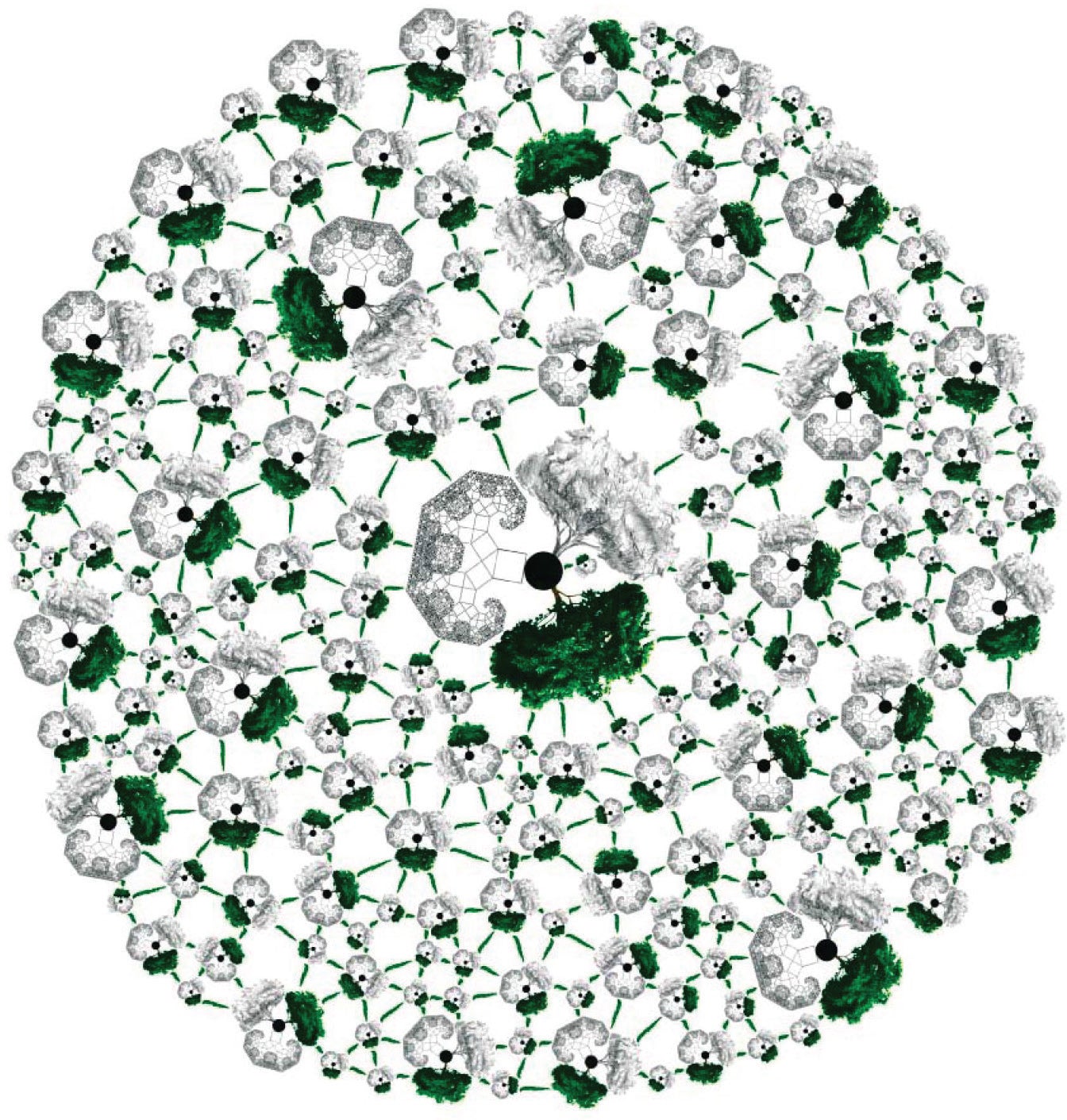 Mathematician-artist Sims lives in Sarasota, Fla., and draws inspiration from a range of mathematical ideas. The central image here depicts trees growing on a fractal, which is a pattern that is self-similar: it is the same at every scale, whether you zoom in or out.

Such patterns appear in nature in bushy broccoli crowns and jagged mountain ranges, and scientists have used them to study a range of phenomena, from the structure of the cosmos to the flight patterns of birds.

This figure combines images of a real tree, a drawn tree and a fractal in the shape of a tree. It “speaks to the intersection of math, art and nature,” Sims says. In “Atomic Tree,” the joined shapes serve as building blocks, repeated large and small and connected to form one big network.

Sims first showcased this piece at MathArt/ArtMath, a 2002 exhibition he co-curated at the Ringling College of Art and Design. He has also produced many works inspired by the sequence of digits of pi, including quilts and dresses. With fellow mathematician-artist Vi Hart, in 2015 he produced a “Pi Day Anthem,” in which the duo recites the digits of pi over an infectious drum and bass groove.

Jespersen calls himself a magic wood-carver. The Danish artist aspires to disbelief: he wants people to see, hold and move his wood creations and still not believe in them. “I’m more of a magician than I am a mathematician or an artist,” he says.

If you hold this ball in your hands, you quickly realize that each of these beetles jiggles independently from the rest, and yet they are interlocked and unable to be removed from the whole without breaking something. The ball is carved from a single block of beech.

Jespersen has been inspired by Dutch artist M. C. Escher, much of whose art was mathematical in spirit. Escher popularized tessellations, which are geometric shapes that fit together in a repeated pattern that covers, or tiles, a plane. Mathematicians have long investigated the properties of tessellations—not only of a flat surface but also of higher dimensions. (Escher himself was inspired by the use of tessellations in Islamic art; in particular, the patterns used to decorate the walls of the Alhambra in southern Spain.) Jespersen’s “Scarabs” uses the little bug as the basis for its tessellation.