The first of our subjects, geography, is the science of describing the surface of the globe, whilegeology has for its object the description of the interior of thc earth, and tracing the lJistory of the rocks of which it is composed. Any one looking at a map will at once pcrceive the amount of talent, observation and calculation necessary to perfect such a drawing, and the same is equally true of a geological chart or section. We wish, in this article, to show the necessity of a perfect description of our earth, and also indicate the means at command for performing the labor, and, so to speak, for jotting down the items in thc great encyclopedia off,\Cts. It is of thc utmost importance to the mariner, and all who trust themselves upon the ocean, that there should be perfect and reliable charts and instructions, deduced from practical observations, of the route they are about to travel. It is equally necessary that every current should be indicated and soundings taken, aud the depth of water, at various points, marked on the charts, so that every ocean and sea may become as well known as the Atlantic, from New York to Liverpool. Commerce demands geographers to work in this field, and the saving of human life is their reward. Again, it is necessary that the land should be equally well mapped out, in order that boundaries may be accurately determined, and the divisions of States and countries may be truly known. It may seem surprising to some of our readers, that the destiny of a nation often depends on a geographical question. The late war between Great Britain and Russia was one of boundary, and the Paris Conference was called to settle the question; and there are many parallel cases in history where one geographer would have settled a question which took many battles and victories to determine. Geology is important, as developing the resources of a countryits explorations are requisite to make out where the coal, iron and mineral veins are concealedto discover the locnlity of building stones, and marbles, and of clays for bricks, and also to determine their extent, and the best places to commence their working. Now, let us inquire the means at command for attaining these objects. The governments of nearly every country having any pretensions to civilization have now an org'anized body of scientific men to make these geographical and geological charts, sections and maps. IVe have a Coast Survey, and we are occasionally sending out exploring expeditions whose aim is to do the work we have mentioned. Each State has its geologist and scientific corps for exploring and giving to the world an account of its rcsources and capabilities. Great Britain has her Ordnance Survey, and her ships of war are always carrying on this work of mapping the globe. Germany has her great band of scientific amateurs, and the learned of each nation are voluntarily doing their utmost for the good of the world. A vast amount of labor has been done in this field by the means we have specified, but there yet remains much to be done, and we would point this out as a sphere of enterprise in which many can engage, and by first makin" a chart of their own district they may exte:d theirlabors to wider and unexplored fields.

This article was originally published with the title "Geography and Geology" in Scientific American 13, 10, 77 (November 1857) 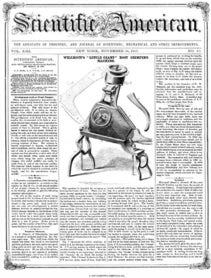