An interesting paper on this subject was recently read before the Geological Society of London by II. C. Sorby, F.K.S., in which his experience in the microscopical examination of crystals was given. In some of these, dry cells are found ; in "others there are water cavities. Crystals having cavities with water, ho concludes, were formed from aqueous solutions; crystals containing dry cavities were formed from matter in a state of igneous fusion; crystals containing both water and dry cavities were formed under great pressure, by tho combined influence of highly heated water and melted rock The amount of water in some of these cavities may be employed to deduce the temperature at which the crystals were formed ; those containing few cavities were formed more slowly than those containing many. Applying these general principles to the study of natural crystalline rocks, minerals, &c, it appears that the fluid cavities in rock salt, in some calcareous spar, in limestone, and in some gypsum, indicate that these minerals were formed by deposition from solution in water, at a moderate temperature, and the same conclusions apply to other minerals in veins in various rocks. The constituent minerals of mica-schist and the associated rocks contain many fluid cavities, which indicate that they were metamorphosed by the action of heated water, and not by mere dry heat and partial fusion, as the plutonist geologists have taught. The structure of minerals in erupted lava proves that they were deposited from a mass in a state of igneous fusion, like the crystals in the slags of furnaces; but in some blocks projected from volcanoes there are water as well as dry cavities, which indicate that they were formed under pressure at a dull red heat, when both water and liquid rock were present. Quartz in veins has a structure proving that it has been rapidly deposited from a solution in water, and sometimes at a high heat, (about ;529 Fall.,) and when the temperature was greater, mica, tinstone, and even felspar were deposited. Solid granite, far from contact with stratified rocks, sometimes contains fluid cavities; this is especially the case with coarse-grained quartoze granites, in which tho water constitutes two per cent of the volumo of the quartz, and the cavities are so numerous and minute as to number thousands in a cubic inch; tho felspar nnd quartz in this granite contain dry cavities, thns showing that these minerals were formed with water under fusion at high temperatures. The conclusion arrived at from this is, that granite is not a simple igneous rock, formed as geologists have generally taught, when the earth was :i mass of fire, and when no water could be found resting upon its surface.

This article was originally published with the title "Geology of Crystals" in Scientific American 13, 26, 205 (March 1858) 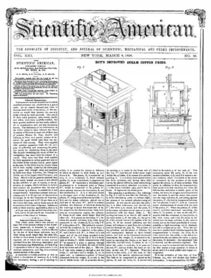