Astronomers have announced a new batch of discoveries of gravitational waves—ripples in space-time caused by cataclysmic cosmic events.

The haul consists of four mergers of black holes that were detected—but not disclosed—in 2017, including a hint of the largest such merger yet, which produced a black hole more than 80 times as massive as the sun.

The studies were posted on the website of the Laser Interferometer Gravitational-wave Observatory (LIGO) collaboration and appeared on the arXiv repository on December 3.

LIGO made the first historic detection of gravitational waves, from a black-hole merger, in 2015, and has reported a smattering of other wave-producing events since. The latest data release brings the total cache to 10 black-hole mergers, and the collision of two neutron stars. That event was also observed by a coterie of other instruments—from radio telescopes to space-based gamma-ray observatories—and helped to solve a slew of cosmic mysteries.

All 11 events were seen by LIGO’s two interferometers, in Louisiana and Washington State, and two of them were also seen by Virgo, the slightly less sensitive observatory in Italy.

The observatories had particularly striking series of successes in August 2017: in addition to the neutron stars, they saw four black-hole mergers that month. Virgo scored its first-ever detection on August 14, contributed data to the August 17 neutron-star search and then saw another merger on the August 18. “And then I was out of cigars,” says Jo van den Brand, a physicist at the National Institute for Nuclear and High-Energy Physics (Nikhef) in Amsterdam and the spokesperson for the Virgo Collaboration.

To put together the catalogue, the international LIGO-Virgo collaboration reanalyzed data from the events that it detected in real time in its first run, in 2015 and early 2016, and in the second one, which started in late 2016 and finished in 2017.

In particular, improved data-analysis techniques have enabled the team to reclassify an event from October 2015—less than one month after LIGO’s first detection on September 14—as a bona fide black-hole merger. Previously, they had only described it as a “candidate” event.

The group also performed an “off-line” analysis and found events that had not been spotted before. “We decided to wait until the off-line analysis is finished, and to publish all the black holes in one go,” says Karsten Danzmann, a physicist at the Max Planck Institute for Gravitational Physics in Hanover, Germany.

The off-line findings included the 80-solar-mass monster, dubbed GW170729 according to its date. It was detected with a lower level of confidence than the others, but the team still decided to include it in the catalogue. “GW170729 still is most likely a real event,” says Cole Miler, an astrophysicist of the University of Maryland in College Park who is not part of the collaboration.

In addition to the 11 events, the catalogue discloses for the first time more than a dozen “marginal” triggers. These are events recorded by at least two interferometers recorded a signal, but that do not have enough confidence to qualify as a probable astrophysical event.

A change in the LIGO-Virgo procedures relaxes the standards for what the collaboration calls an event and for what will disclose in real-time. Miller says that this could be good for the rest of the astronomy community. “It means that there will be more chances for them to do follow-ups.”

The team rushed to finish up this work so that it could focus its energy on the third observing run, due to start in March 2019, van den Brand says. Since September 2017, the three detectors have been under construction for upgrades that should roughly double their overall sensitivity. This means that the volume they monitor—and the frequency of their detections — should increase by a factor of eight.

This article is reproduced with permission and was first published on December 4, 2018.

This article was originally published with the title "Gravitational-wave astronomers detect hints of largest black-hole merger yet" in SA Space & Physics 2, 1, (February 2019) 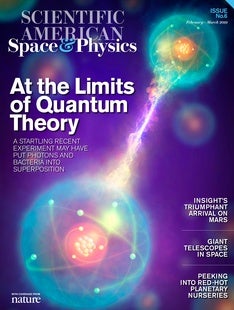