Suddenly she heard someone call her name--"Laurie!"--but no one else was in the room. Feeling irritated, Laurie looked around the apartment. It was empty. Maybe someone was in the hallway? Or at the door? She found no one. Realizing that she was completely alone, Laurie felt chills run up her spine. Was she crazy?

Perhaps no other symptom is as instantly associated with insanity--some 70 percent of schizophrenics hear voices that regularly interrupt their thoughts, as do 15 percent of those who have mood disorders--but auditory hallucinations are not necessarily a sign of mental illness. They can arise as symptoms in any number of conditions, including Alzheimer's and Parkinson's diseases and temporal lobe epilepsy. In addition, episodes can occur in the absence of any physical or psychological problem.

Listen Up
In fact, auditory hallucinations may not be uncommon. Because it is difficult to define the phenomenon with true precision, data on its prevalence differ from study to study. As early as 1983, though, psychologists Thomas B. Posey and Mary E. Losch, then both at Murray State University in Kentucky, found that roughly 70 percent of the 375 college students they questioned admitted to having heard voices at least once. Subjects thought that they had heard deceased relatives, divine beings or their own thoughts. Still others had heard their names, often before falling asleep. Acoustic perceptions during waking or presleep phases--reported by 40 percent of Posey and Losch's subjects--are generally viewed as pseudohallucinations. Thus, by including them in their tallies, these researchers may have produced a high estimate.

Nevertheless, in 1991 a National Institute of Mental Health survey found that nearly 5 percent of the 15,000 American adults who responded had experienced hallucinations--most of them auditory--during a one-year period; only one third of that group also met criteria for a psychiatric diagnosis. According to Thomas Bock, a psychotherapist and director of the outpatient psychosis service at the University Medical Center of Hamburg-Eppendorf, Germany, at least 3 to 5 percent of the population in western Europe and the U.S. hear voices. Schizophrenia, in comparison, affects only about one in 100.

Too Much and Too Little
How do these perceptions come about in the absence of external stimuli? As Bock explains, acoustic hallucinations may arise from "too much inside" or "too little outside." On one side of this theoretical coin, Bock suggests that, psychologically, some affected people may hold too much on the inside. Sufferers have often experienced some kind of trauma as a child or adult, such as neglect, abuse, rape or a severe accident. Many then suffer from unresolved conflicts or find themselves in situations that overwhelm them. In these cases, verbal hallucinations may serve as signals that they need to pay attention to their own inner voice.

From a neurobiological perspective, the notion of "too much inside" makes sense in that some sufferers appear to interpret their own thoughts as alien. Some researchers therefore suspect that the hallucinations involve a failure in a specific feedback circuit in the brain, which normally tells us that "I" am now thinking or speaking, not someone else. This hypothesis--that self-generated speech gets misattributed--seems to apply especially well to hallucinating schizophrenics, about whom researchers have the most information.

Philip K. McGuire and his colleague Louise C. Johns of the Institute of Psychiatry at King's College London tested the model by having several schizophrenic patients, as well as people with no psychiatric history, speak into a microphone. At the same time, the test subjects listened to their voices, distorted by the researchers, through headphones. The participants were asked to press a button if they thought they were listening to themselves. In general, the schizophrenics had greater difficulties identifying their own voices. Those who had active hallucinations most often attributed their speech to an external source, particularly when what they said into the microphone was disparaging or contemptuous.

Studies using brain-imaging techniques have also elucidated the physiological mechanisms that underlie verbal hallucinations. In 1993 McGuire and his colleagues scanned the brains of 12 schizophrenics while they were hearing voices and while they were not. They found that during the hallucinations the greatest increase in brain activity took place in Broca's area, a region involved not in hearing speech but in producing it. Other speech-processing areas of the brain, including the superior temporal gyrus in the left temporal lobe, are under close scrutiny. This gyrus, or bump, is responsible for speech perception and plays a crucial role in the integration of acoustic and speech information. Various researchers, among them Thomas Dierks of the University of Bern in Switzerland, have demonstrated that it also plays a key role in verbal hallucinations.

In 1999 Dierks, who was then at the University of Frankfurt, and his co-workers used functional magnetic resonance imaging (fMRI) to observe the brains of three schizophrenic patients while they were hearing voices. In addition to the superior temporal gyrus, they found activity in the primary auditory cortex, which normally processes sounds from the outside world. No wonder these patients believed their hallucinations were real: their brains responded to them much as they did to actual speech. Several other studies have produced intriguing findings, among them that the left superior temporal gyrus seems consistently smaller in patients with severe acoustic hallucinations. Exactly what this size difference signifies is still the subject of speculation.

On the flip side of Bock's theoretical coin, hearing voices is not always a consequence of neurobiological change. Sometimes the brain simply receives too few stimuli from the outside world. People who hear voices often live extremely withdrawn lives--and the hallucinations, in turn, fuel social rejection. Some sailors and hikers, for example, who have endured stimulus-poor conditions for prolonged periods have reported auditory hallucinations. Indeed, Rilke's angel spoke only after he had lived for two months in isolation at Duino Castle. Deafness, too, can present a kind of isolation. In 1992 Detlef Koempf, a neurologist at the University Medical Center of Schleswig-Holstein, Germany, discovered that musical hallucinations are not uncommon in older people who have lost some hearing. He hypothesizes that the brain stores auditory information that it has captured over an extended period. If the external output is cut off, the deposited signals may take on a life of their own.

Whether hearing voices presents a medical problem depends largely on how much a person suffers. A Dutch team headed by Marius Romme, then at the University of Maastricht in the Netherlands, found significant differences in the types of auditory hallucinations experienced by schizophrenics and people who were psychiatrically normal. Both groups reported dialogues, running commentary or the vocalization of their own thoughts. The mentally ill, however, far more frequently described negative voices: "You stupid idiot!" or "As usual, you revealed our family secrets!" The other study participants usually heard benign voices that encouraged them: "Come on, you can do it!" or "It really wasn't your fault." In addition, they were more likely to feel that they were in control of the voices.

Hushed Voices
For those who do suffer from their inner voices, researchers are trying to find ways of hushing them. Antipsychotic medications work for some but not all patients. As an alternative, Ralph E. Hoffman and his co-workers at the Yale University School of Medicine have investigated the potential of transcranial magnetic stimulation (TMS), a technique by which they can decrease brain activity in certain regions using magnetic fields. They have applied TMS to the regions involved in speech processing. In 2000 they suppressed acoustic hallucinations in 12 schizophrenic patients by decreasing the arousability of the temporoparietal cortex. In a follow-up study in 2005 they treated 50 patients for nine days with low-frequency impulses and found that verbal hallucinations decreased markedly in more than half the patients--an effect that lasted for at least three months.

Limited Talk Time
Fortunately, it is not always necessary to eliminate the voices completely to decrease the discomfort they cause. Most people who experience acoustic hallucinations attribute a purpose to their voices. How they view their voices--well-meaning or out to destroy them--is almost always a function of what they hear. In 2003 Mark van der Gaag, now at the Free University Amsterdam in the Netherlands, found that only two of 43 patients evaluated their hallucinations differently from what researchers expected. Some patients are convinced that critical voices are actually well-meaning. "As therapists, we need to pay more attention to how a person explains the phenomenon," Bock concludes. Therapists who immediately talk in terms of severe mental illness often only make the problem worse, risking that the patient will withdraw. The sooner a patient begins to talk about the voices, the less power those voices tend to have.

Frequently, it is enough to reframe the voices. Even if they are overwhelmingly negative, other intentions or characteristics may be attributed to them through therapy. According to guidelines developed by Netzwerk Stimmenhoeren, a German organization dedicated to founding self-help groups and supporting the affected, their families and the psychiatric community, the main goal is to make sufferers "masters in their own house" again. Patients can sometimes regain this control not only by listening to the voices but by answering them, concentrating on positive messages and agreeing to specific, limited talking times.

Another mainstay of treatment involves changing a patient's social interactions. Often a person's relationship with his or her voices mirrors those with real people, as Mark Hayward, now at the University of Surrey in England, demonstrated in 2003. If, for example, a person usually subordinates herself to someone else, she will tend to hear dominant voices. The net effect is that the hallucinations become increasingly real. Networks of fellow sufferers may help people reduce the isolation they feel and make strides in recovery. "I got to the point where I couldn't take it anymore," Laurie says, explaining why she dared to "come out." Laurie agreed to make time for her voices in the morning, and, in exchange, they agreed to leave her alone the rest of the day. The approach may seem odd, but it worked. Now, she says, "My voices simply don't scare me anymore."

BETTINA THRAENHARDT is a psychologist and science journalist in Bonn, Germany. 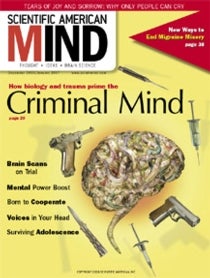