Moving from a well-lit space into a dark one has always been a common experience in human lives, explains Bruno Laeng, a cognitive and visual scientist at the University of Oslo in Norway. “Driving into a tunnel and [perceiving] an expanding dark hole flowing toward you at the center of your vision” is akin to what our ancestors might have experienced “when entering a dark cave.” Because such occurrences are so regular, being able to dilate one’s pupils in anticipation of the enveloping darkness could mean seeing predators and prey better and faster in dim environments. “Adjusting the pupil in advance would diminish the possibility of being temporarily, visually, incapacitated by imminent darkness,” Laeng says.

But what if the rising darkness exists only in the mind of the observer? In a recent study, Laeng, along with collaborators Shoaib Nabil, also at Oslo, and Akiyoshi Kitaoka of Ritsumeikan University in Japan, set out to determine if subjective darkness expansion can cause pupils to dilate as they would in the presence of veridical growing blackness.

The research team recorded experimental participants’ pupil sizes as they viewed images based on an illusion originally developed by Japanese designer Kouki Fujiwara. An example is shown at the top of this page . Although the black center of the magenta-patterned background seems in never-ending expansion, as if it were an animation, in reality nothing moves. The deceptive growth sets this illusion apart from other classic illusions in which objects seem larger or smaller than in reality (such as the Muller-Lyer illusion or the Ebbinghaus illusion) without the observer perceiving motion, Laeng adds.

The data showed that the pupillary light reflex “does not work a like a photocell opening a door—which is impervious to any other information than the actual amount of light stimulating the photoreceptor.” Instead the eye adjusted to the perceived light levels. Interestingly, the changes in pupil size were linked to the strength of the illusory expansion for black “holes” only and not for white or colored ones. The discrepancy made sense to the scientists because the visual system would be more challenged by moving into a space with no light than by moving into a space that was lighted differently.

In addition, not every participant experienced the illusion of expansion, but some people perceived the images as static ink blots. “This made us reflect that different individuals make different (often subconscious) assumptions about the same image—such as interpreting these 2-D displays as a 3-D scene where one can move about,” Laeng says.

This article was originally published with the title "Hello Darkness, My Old Friend" in SA Mind 33, 5, (September 2022) 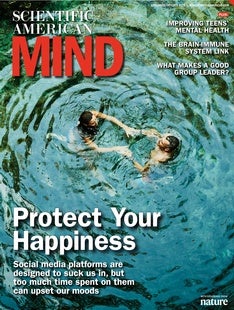