The boring bar, which is shown in the accompanying engraving, is particularly adapted for use in boring out car wheels to fit the latter to the axle instead o the axle to the wheels. The device is of very simple construction and provides means whereby the tool-holding blocks may be quickly and accurately adjusted, as the work proceeds. The boring bar is indicated at A in the engraving, which shows only the lower part of the tool. In this bar is a transverse slot adapted to receive a pair of blocks, ? and C. A screw, 7), passes through these blocks. That portion of the screw which jjasses through block ? is cut with a right-hand thread, while the portion engaging block (1 is formed with a left-hand thread. To prevent longitudinal movement of the adjusting screw 7) it is retained by means of a pair of rods, E. which ]iass through the bar A and fit into an annular channel in the center of the screw 7). The block ? is formed with a transverse slot to receive the cutting tool, F, and similarly, the block C carries the cutting tool, G. The iJins 77. in the blocks ? and C prevent the cutting tools from being moved too far inward. The cutting tools are clamped in the required position by means of screws, K. A slit extends from the end of the bar A to the transverse slot in which the blocks ? are held, and by means of a screw L the opposite sides of the bar A may be drawn together to clamp the blocks in set position. Whenever it is desired to adjust the cutting tools it is merely necessary to release the screw L and then by turning the screw ?) the blocks ? and C may be adjusted toward or from each other, carrying their respective cutting tools F and G inward or outward to the required degree. The ends of the blocks ? and C are beveled and rounded so that when the screw L is tightened the blocks will be clamped at the ends as well as at the sides. A patent on this boring bar has been secured by Mr. William Chase, .Tr., lndianapolis, Ind.

This article was originally published with the title "Improved Boring Bar" in Scientific American 97, 22, 399 (November 1907) 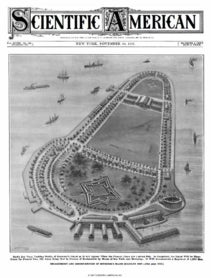