In 1944 researchers recognized that millions of people were at risk of famine as a result of the ravages of World War II. To investigate the impact of food deprivation on the human body, 36 healthy men volunteered to endure a six-month semistarvation diet and be observed by scientists and doctors. The result? Hunger made the men obsessed with food. They would dream and fantasize about eating. They reported fatigue, irritability and depression, along with decreased concentration, comprehension and judgment. Interestingly enough, the subjects were allowed about 1,500 calories a day, substantially more than many fad diets endured today. It’s no wonder that diets based on restricting food are unsustainable— according to some studies, approximately 95 percent of diets fail over the long term. As Shirin Panahi reports, researchers are now exploring whether a diet that centers on satisfying foods—healthy foods that make the eater happy (imagine that!)—might be the key to maintaining body weight after all (see “Have We Found a Diet That Truly Works?”). What a fulfilling prospect.

Elsewhere in this issue Jen Schwartz takes a compelling look at the science of the withdrawal tactic for preventing pregnancy (see “Can You Prevent Pregnancy with the Pullout Method?”), and Helen Shen covers a wave of research on how boosting the molecule nicotinamide adenine dinucleotide (NAD) might stave off the aging process. The trend is alarming some critics who worry about that molecule’s association with cancer (see “Cancer Research Points to Key Unknowns about Popular ‘Antiaging’ Supplements”). As always, enjoy this issue!

This article was originally published with the title "In Search of Satisfaction" in SA Health & Medicine 1, 4, (August 2019) 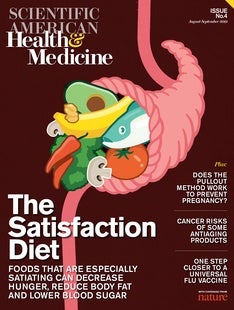