In his monumental series Cosmos, astronomer Carl Sagan famously said that we humans are “made of star stuff.” Dying stars are continually filling the universe with heavy elements, and the energy of the cosmos sparked life into existence on this planet. After billions of years, plants began to harvest sunlight directly, converting solar into chemical energy, and therefore all human life feeds on the output of stars. Those same elements that streamed through the vacuum of space and coalesced in the core of Earth also, it seems, created the conditions under which life can survive.

As writer Marcus Woo details in this issue’s cover story, certain radionuclides in exoplanets may be the signal to look for if we want to find alien life (see “Stellar Smashups May Fuel Planetary Habitability, Study Suggests”). An exciting potential extraterrestrial signal radiated to Earth last December, causing a media stir, as do all prospects of meeting our cosmic neighbors (see “Alien Hunters Discover Mysterious Signal from Proxima Centauri”). Indeed, if we find intelligent life in the universe, we will have a common heritage.

This article was originally published with the title "Journeywork of the Stars" in SA Space & Physics 4, 1, (February 2021) 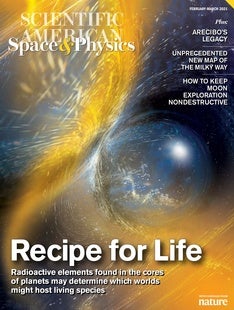