Neuroscientist Stefan Schneider of the German Sport University Cologne looks for answers in a research station in Antarctica. Interview by Anna von Hopffgarten.

Hopffgarten: Humans are drawn ever farther into space, and flying to Mars may become possible in our lifetime. A trip to the Red Planet is now estimated to take about eight months each way, with a minimum stay of a year on the planet surface. What challenges would a mission like this pose for the psychological well-being of astronauts?
Schneider: A long spaceflight would impact a person in many ways. The astronauts would live in close quarters for a very long time—and a spacecraft really does not offer much room for retreat. That can be stressful. Another issue is the monotony: there is little variation in the daily routine of an astronaut, and the surroundings do not offer much diversion.

Your latest study focuses on specific effects of isolation on the human brain and psyche. How did you investigate this?
We worked with volunteers among the staff of the Antarctic research station Concordia, whom we monitored for a period of eight months spanning the Antarctic winter. Of course, we would have loved to conduct experiments on a genuine space station—but for practical reasons, that was never really an option. Sending several people to outer space for months at a time would have been very expensive, and observing them in that environment is tricky from an experimenter’s point of view. Therefore, we decided to set our study in a so-called analogous environment—in our case, the Concordia station. This building complex is secured on the top of a plateau, 1,000 miles from the South Pole. It looks like a giant soda can cut in half and is surrounded by only ice and snow. In many ways, the conditions our volunteers faced here are similar to those on a space station. Concordia is situated in one of the coldest places on earth: temperatures during our experiment averaged about –65 degrees Celsius (–85 degrees Fahrenheit). Under these climatic conditions, no vehicle could reach the station. The station’s inhabitants could go outside only for very short and only when weather permitted. They spent three of the eight months in the complete darkness of the polar night.

Who took part in your study?
Mostly they were scientists conducting research in Antarctica, like glaciologists and astronomers, but some of the station’s support staff were among our volunteers, too—including an electrician, a cook and a medic. Of 14 Concordia crew members at the time, eight agreed to participate in our study.

What did their lives at the station look like?
The routine of a person was determined by their role—each had his or her own set of tasks. The scientists at the station ran experiments for their respective studies, the cook prepared the meals for the entire crew, and so on. The commander of the station regularly tried to get everyone together for a shared breakfast, so no one would break away from the group. Just like at a Boy Scouts camp, that idea sometimes worked and sometimes it did not. And once breakfast was over, everyone went their separate ways for the rest of the day to work their jobs.

How did you study the effects of isolation on the Concordia inhabitants?
Once every six weeks we asked our volunteers to fill in a questionnaire on their physical and psychological well-being. At this point we also measured their brain activity by EEG. Before the start of the study, we had prepared them to conduct the test procedure themselves because we could not physically be present and help them with the examination. In addition to the tests, four of our eight participants also took part in a sports program.

What kind of exercise did they do there?
The participants could use a small gym in the station, which is fitted with a treadmill and a few weights. Apart from that, the training consisted of exercises that use a person’s own body weight, such as push-ups, pull-ups and rope skipping.

What are the results of your investigation?
The persistent isolation and the monotonous surroundings had a negative effect on the reported mood of the participants. This was, however, only the case with people who did not take part in the sports program. As early as six weeks after the start of the study, their well-being had already suffered. With increased psychological pressure, their motivation dropped, and they reported they felt less fit. Their levels stabilized at this lower than usual level.

What about people who were physically active?
Their mood did not suffer but instead remained constant for the whole test period.

How do you explain that?
We believe the positive impact of exercise is rooted in its effect on the prefrontal cortex. From previous studies, we know that this part of the brain—which is responsible for cognition and emotion—is less active after physical activity. Stress and discomfort, on the other hand, cause activity in this brain region to spike. We now believe that during sport, cortical activity shifts to other areas. That gives the prefrontal cortex the chance to “reset.” You could imagine it as a computer chip on overdrive. Physical activity reroutes the entire brain circuit so that this area can recover. Sports therefore quite literally reboot the brain.

The study participants also monitored their brain activity at the Antarctic station. What were the results?
We measured the so-called alpha and beta waves with EEG. High levels of alpha activity indicate that the brain is in a relaxed state—as soon as we close our eyes, alpha waves start creeping up in an EEG. Beta waves, on the other hand, signify a state of awakeness. After six weeks at the station, both kinds of brain waves increased slightly in the nonsport group, whereas they dropped continuously in the sport group. At the end of the experiment, physically active persons displayed roughly 40 percent less alpha and beta activity than their less active co-workers.

How do you interpret these findings?
Normally, higher alpha activity would go hand in hand with increased relaxation—which would have implied that the inactive group was more relaxed than the sports group. Had this been the case, we would also have seen simultaneous decreases in beta activity. Because both alpha and beta waves are high in our nonsport group, we believe it is more likely that this represents a general increase in cortical activity in our volunteers. The extreme conditions these people had lived in—the cold and dark Antarctic winter, the lack of variation in scenery and routine, and the limited interaction with others—all that had left a mark on them. They were under psychological and physical stress, which may have caused their higher than usual cortical activity. Sports may have dampened this response in the second group. Still, caution is warranted when interpreting these findings: the comparison of alpha versus beta waves paints a picture that is too simplistic to make definite statements. In follow-up examinations, I would try to capture more detail with a much more thorough EEG analysis.

How does your Antarctica experiment differ from the Mars500 trial, where six volunteers simulated a 520-day flight to Mars?
In contrast to the Mars500 study, our volunteers were housed in a genuine research station where they had to fulfill an actual mission. Our glaciologists, for example, drilled holes into the ice to study its makeup. They had to face very real situations and problems, in many respects much like the ones that astronauts handle in longer space missions. One factor our experiment could not simulate, though, was a zero-gravity environment.

Locked into a tiny complex with 13 other people for several months—in that setting, it is hard to imagine loneliness would be a problem. Could your results come from the stress caused by the close proximity with this group?
In this environment, as in a real space mission, both states coexist: a sense of isolation or loneliness and the lack of personal space with little possibility for privacy. They are two sides of the same coin, and therefore we cannot differentiate them or treat them as separate factors in our experiments. One goes with the other.

Is it possible that the lack of personal space was an even bigger challenge than the isolation?
That surely is the case for some people—a lot depends on personality. You may remember the 2010 mining accident in Chile, where 33 people were stranded underground for 69 days. One of the survivors later said what kept him sane was the possibility of hiding away in the network of tunnels—by himself. So despite being cut off from the outside world, the miners still had some options to retreat and spend some time alone. Astronauts also repeatedly say that spending time in solitude is one of the things they miss most in space.

On your space mission, you usually cannot choose your fellow astronauts. Do you have any advice for how to best cope with interpersonal conflicts should they arise?
A crew will be put together with social criteria in mind. Before the mission starts, there are in-depth assessments of who gets along with whom and which people might antagonize one another. Additionally, astronauts receive psychological training, where they learn how to best deal with—or straight out avoid—conflicts. Still, it is important that everyone makes up their mind about how they can best relieve stress. Sport is one option to do so.

How about daily life: Would you recommend a stressed person to exercise more?
For some, that surely would be good. Elderly people in particular often slide into a vicious circle that begins with retirement. At that point a person may lose a majority of their social circle as well as their main reason to get up in the morning. Some react by withdrawing and staying at home most days—especially those who are not that fit later in life. That can gnaw away at their self-esteem. As a consequence, their physical health progressively recedes, and because of a lack of variation the brain is not fed enough sensory input—which, in turn, also leads to a decline in mental function. Those deficits draw up new hurdles that prevent a person from going outside and meeting new people. A regular workout may help counter that.

Those who may profit most from sports are lonely people. But some studies claim that, in general, they have trouble motivating themselves to exercise. Can you think of ways to solve this dilemma?
Deep down we all know that exercise is healthy. Still, that by itself does not seem to push everyone to exercise more. That is because part of our tendency to enjoy sports develops when we are young. If a child likes to move, they often come back to that in later life. So we should look for reference points from childhood: Which sports did I like as a child? Maybe I should give that another go! One thing that surely won’t help is trying to convince someone to take up a specific activity without consideration for what the person may enjoy.

How do you cope with loneliness?
I actually enjoy every moment of solitude I get. That is why I like to jog in a forest, where I can find peace and quiet.

Anna von Hopffgarten is a biologist and editor at Gehirn & Geist. 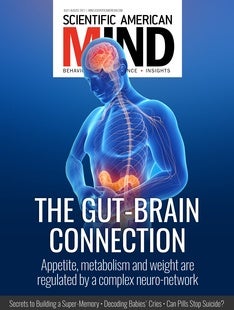