HE PEERS OUT AT ME a bit disdainfully, I think, with his diadem and brocaded fabric slung regally over one shoulder. But I don’t take it personally. After all, the so-called priest-king has regarded all comers that way since he emerged from soapstone under the careful ministrations of an Indus Valley sculptor some 4,000 years ago. His enigmatic gaze—by turns seemingly guarded, pensive, smug or maybe just sleepy—is emblematic of the challenges for archaeologists who are trying to interpret the physical signs of everyday life left behind by ancient peoples. What role did the priest-king’s ilk play? What was the artist thinking when he made the figure? What was workaday existence like?

Aspects of the priest-king’s society, featured in “Uncovering the Keys to the Lost Indus Cities,” on page 24, remain mysterious, because we have yet to decipher its writing. Lacking such direct communiqués from ancient peoples, archaeologists turn to other clues—their structures, their artwork, their tools, even their very bones. Examining such relics, scientists attempt to fit the pieces into a comprehensive cultural picture. As fellow members of humanity, the ancient ones must have been very much like us in many ways. But the latest excavations are uncovering some surprising differences as well. Consider the denizens of Çatalhöyük, in central Turkey, 9,000 years ago. Oddly, they walked atop their city and entered their houses from above. They had no sidewalks, no front doors. Yet they had a remarkably modern knack for sharing tasks between the sexes. Perhaps surprisingly, in Egypt circa 1500 B.C.E., even stonecutters had the chance to learn to read and write in a community that greatly valued literacy [see “Daily Life in Ancient Egypt,” on page 68]. Not all the civilizations’ tales end well, of course. One case is the prehistoric people of Malta, near Sicily. In the face of local environmental decline, the Maltese developed a consuming obsession with death, which is all the more poignant because it may have led to the culture’s demise. To find out why, see “The Death Cults of Prehistoric Malta,” which begins on page 14.

These civilizations, among the others featured in this special edition of Scientific American, demonstrate an impressive power to puzzle and intrigue us across the span of time. In the pages that follow, we invite you to contemplate our shared human heritage, in all its glorious—and inglorious—forms.

This article was originally published with the title "Lost Ways of Life" in SA Special Editions 15, 1s, 3 (January 2005) 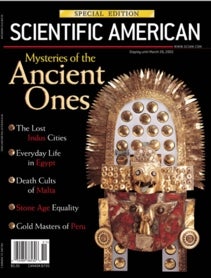 In the store
SA Special Editions
Mysteries of the Ancient Ones
$7.95