The arid badlands of ethiopia's remote afar region have long been a favorite hunting ground for paleoanthropologists. Many hominins—the group that includes all the creatures in the human line since it branched away from that of the chimps—once called it home. The area is perhaps best known for having yielded “Lucy,” the 3.2-million-year-old skeleton of a human ancestor known as Australopithecus afarensis. In 2006 researchers unveiled another incredible A. afarensis specimen from a site called Dikika, just four kilometers from where Lucy turned up. But unlike Lucy, who was well into adulthood by the time she died, the recently discovered fossil is that of an infant, one who lived 3.3 million years ago (and yet has nonetheless been dubbed “Lucy's baby”).

No other hominin skeleton of such antiquity—including Lucy—is as complete as this one. Moreover, as the earliest juvenile hominin ever found, the Dikika child provides an unprecedented opportunity to study growth processes in our ancient relatives. “If Lucy was the greatest fossil discovery of the 20th century,” says Donald C. Johanson of Arizona State University, who unearthed the famed fossil in 1974, “then this baby is the greatest find of the 21st thus far.”

It was the afternoon of December 10, 2000, when fossil hunters led by Zeresenay Alemseged, now at the California Academy of Sciences in San Francisco, spotted the specimen. Only part of its tiny face was visible; most of the rest of the skeleton was entombed in a melon-size block of sandstone. But “right away it was clear it was a hominin,” Alemseged recollects, noting the smoothness of the brow and the small size of the canine teeth, among other humanlike characteristics. Further evaluation, however, would have to wait until the fossil was cleaned—a painstaking process in which the cementlike matrix is removed from the bone almost grain by grain with dental tools.

It took Alemseged five years to expose key elements of the child's anatomy; he continues to analyze bones revealed since then. Still, the find has already surrendered precious insights into a species that most researchers believe gave rise to our own genus, Homo. Alemseged and his colleagues described the fossil and its geologic and paleontological context in two papers published in 2006 in Nature. And at a press conference held in Ethiopia to announce the discovery, they christened the child Selam—“peace” in several Ethiopian languages—in hopes of encouraging harmony among the warring tribes of Afar.

The skeleton, judged to be that of a three-year-old girl, consists of a virtually complete skull, the entire torso, and parts of the arms and legs. Even the kneecaps—which are no larger than macadamia nuts—are preserved. Many of the bones are still in articulation. Hominin fossils this complete are incredibly rare, and ones of infants are rarer still because their bones are that much more fragile. Indeed, the next oldest skeleton of a juvenile that is comparably intact is a Neandertal baby dating to around 50,000 years ago.

The exceptional preservation of Selam, as well as that of other animals found at the site, indicates to team geologist Jonathan G. Wynn of the University of South Florida that her body was buried shortly after death by a flood event. Whether she perished in the flood or before it is unknown.

Although she was only three when she died, Selam already possessed the distinctive characteristics of her species. Her projecting snout and narrow nasal bones, for example, readily distinguish her from another ancient youngster, the so-called Taung child from South Africa, who was a member of the closely related Australopithecus africanus species. And her lower jaw resembles mandibles from Hadar, the site where Lucy and a number of other A. afarensis individuals were found.

Selam also exhibits the same mash-up of traits in her postcranial skeleton that has long irked scientists interested in how A. afarensis moved around the landscape. Scholars agree that A. afarensis was a creature that got around capably on two legs. But starting in the 1980s, a debate erupted over whether the species was also adapted for life in the trees. The argument centered on the observation that whereas the species has clear adaptations to bipedal walking in its lower body, its upper body contains a number of primitive traits better suited to an arboreal existence, such as long, curved fingers for grasping tree branches. One camp held that A. afarensis had made a full transition to terrestrial life and that the tree-friendly features of the upper body were just evolutionary baggage handed down from an arboreal ancestor. The other side contended that if A. afarensis had retained those traits for hundreds of thousands of years, then tree climbing must have still formed an important part of its locomotor repertoire.

Like her conspecifics, Selam has legs built for walking and fingers built for climbing. But she also brings new data to the controversy in the form of two shoulder blades, or scapulae—bones previously unknown for this species. According to Alemseged, her scapulae look most like those of a gorilla. The upward-facing shoulder socket is particularly apelike, contrasting sharply with the laterally facing socket modern humans have. This orientation, Alemseged points out, may have facilitated raising the hands above the head—something primates do when they climb. (Although gorillas do not climb as adults, they do spend time in the trees as youngsters.)

Further hints of arboreal tendencies reside in the baby's inner ear. Using computed tomographic imaging, the team was able to glimpse her semicircular canal system, which is important for maintaining balance. The researchers determined that Selam's semicircular canals are similar to those of African apes and A. africanus. This, they suggest, could indicate that A. afarensis was not as fast and agile on two legs as we modern humans are. It could also mean that A. afarensis was limited in its ability to decouple the movements of its head and torso, a feat that seems to play a key role in endurance running in our own species.

The conclusion that A. afarensis was a bipedal creature with an upper body at least partly adapted for life in the trees echoes what Jack T. Stern, Jr., of Stony Brook University and his colleagues wrote years ago in their reports on Lucy and her contemporaries. “I was happy to see that this paper suggests I might have been right,” Stern comments. Johanson agrees that the case for a partly arboreal A. afarensis is stronger than it once was. “Early on I was a staunch advocate of strict terrestrial bipedalism in afarensis,” he remarks. But taking more recent findings into consideration, Johanson says, “it's not out of the realm of possibility that they were still exploiting some of the arboreal habitats for getting off the ground at night and sleeping up there or going back to familiar food sources.”

A combination of walking and climbing would fit neatly with the picture that is emerging from studies of the environments of early hominins, including Selam. Today Dikika is an expanse of dusty hills dotted with only the occasional tree or shrub. But 3.3 million years ago, it was a well-watered delta flanked by forests, with some grasslands nearby. “In this context, it is not surprising to have an ‘ape’ that spends time in the trees and on the ground,” comments project member René Bobe, now at George Washington University.

Not everyone is persuaded by the arboreal argument. C. Owen Lovejoy of Kent State University disputes the claim that Selam's scapula looks like a gorilla's. “It's primitive, but it's really more humanlike than gorillalike,” he remarks. Lovejoy, a leading proponent of the idea that A. afarensis was a dedicated biped, maintains that the forelimb features that are typically held up as indicators that A. afarensis spent time in the trees only provide “evidence that the animal has an arboreal history.” The discovery of the famed Laetoli footprints in 1978 closed the debate, he states. The trail did not show a prehensile big toe, without which, Lovejoy says, A. afarensis simply could not move about effectively in the trees.

Experts may disagree over the functional significance of Selam's apelike skeletal characteristics, but they concur that different parts of the hominin body were undergoing selection at different times. A. afarensis is “a good example of mosaic evolution,” Johanson states. “You don't just magically flip some evolutionary switch somewhere and transmute a quadruped into an upright-walking bipedal human.” It looks like natural selection is selecting for bipedalism in the lower limbs and pelvis first, and things that are not really used in bipedal locomotion, such as arms and shoulders, change at a later stage, he says. “We're getting to know more and more about the sequence of changes” that produced a terrestrial biped from a tree-dwelling, apelike creature.

Analysis of Selam's skull hints at a similarly piecemeal metamorphosis. The shape of the hyoid—a delicate, rarely preserved bone that helps to anchor the tongue and the voice box—indicates that A. afarensis had air sacs in its throat, suggesting the species possessed an apelike voice box. Conversely, the child's brain shows a subtle sign of humanity. By studying the fossil's natural sandstone endocast, an impression of the braincase, Alemseged's team ascertained that Selam had attained only 65 to 88 percent of the adult brain size by the age of three. A chimp of comparable age, in contrast, has reached more than 90 percent of its adult brain size. This raises the tantalizing possibility that A. afarensis experienced a more humanlike pattern of brain growth.

More fossils are needed to discern whether the new skeleton is representative of A. afarensis infants, and scientists are doubtless eager to recover remains of other A. afarensis children of different ages—if they ever can—to see how they compare. But the little girl from Dikika still has more secrets to spill. “I think the impact of this specimen will be in its information of the growth and development of Australopithecus, not only for individual body parts but for rates of development among structures within one individual,” observes Carol V. Ward of the University of Missouri–Columbia.

Since the initial description of Selam, continued removal of the sandstone adhering to her remains has exposed all of the bones to some extent. Alemseged expects that he will eventually be able to reconstruct nearly the entire body of an A. afarensis three-year-old—and begin to understand what growing up australopithecine was all about. 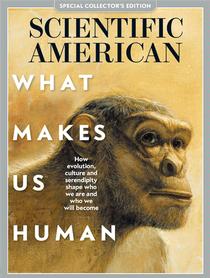