An important apparatus for separating ores and other substances of different specific gravities and of different magnitudes into their constituent parts, has been invented by Victor Simon ot Nerviers, in the Kingdom of Belgium ; the inventor, Mr. S., accomplishes the desired object by passing a current of air through a long trunk or tube placed horizontally or nearly so, with a series of recesses arranged in the bottom of the tube for the reception of the ores, or other substances ; these substances, after being pulverized, are led to one end of the tube from a hopper placed above it, and are subjected to the uniform current of air above the recesses, the heaviest particles fall immediately to the bottom of the tube to the receiver prepared lor its reception, and those lighter to the adjoining recesses, and so on, in proportion to their specific gravities, the lightest being found in the receiver farthest from the feed [opening. The particles of matter received in any one receiver of the series will have a specific gravity so much greater, compared with that of the other particles, as their volume is less, and vice versa. When thus classified, the perfect separation of the different substances may be easily effected, and, at the same time, the removal of any impurities which may exist in the pulverized material. This easy and simple classification and separation of particles of matter is a most desirable result, and will very much facilitate the analysis of ores and other substances submitted to its action. The improvement has been already tested in Belgium, and is believed to be one of utility. An assignment of this invention has been made to gentlemen residing in the United States, who will soon be prepared to offer machines for sale. Engravings, with a more complete description, will appear in the Scientific American anon.

This article was originally published with the title "Machine for Separating Ores" in Scientific American 8, 39, 308 (June 1853) 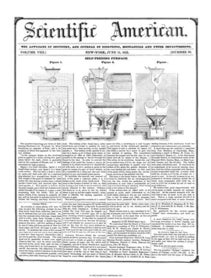