INVENTORS, MANUFACTURERS, AND FARMERS THIRTEENTH TEAR! PROSPECTUS OF THE SCIENTIFIC AMERICAN TMa work differs materially from other publications, being an Illustrated Periodical, devoted to the promulgation of information relating to the various MECHANICAL and CHEMICAL ARTS, MANUFACTURES, AGRICULTURE, PATENTS, INVENTIONS, ENGINEERING, MILL WORK, and all interesta which the light of PRACTICAL SCIENCE is calculated to advance Every number of the SCIENTIFIC AMERICAN contains eight pages of reading matter, abundantly illustrated with from five to eight ENGRAVINGS—all of which are expressly engraved for this publication All the most valuable patented discoveries are delineated and described in its issues, eo that, aa respecta inventions, it may be justly regarded as an Illustrated Repertory, where the inventor may learn what has been done before him in the same field which he is exploring and where he may bring to the world a knowledge of his own achievements Reports of American Patents granted are also published every week, including Official Copies of all the PATENT CLAIMS These Patent Claims are furnished from the Patent Office Records expressly for this paper, and published in the SCIENTIFIC AMERICAN in advance cfatl other publications Mechanics, Inventors, Engineers, Chemists, Manufacturers, Agriculturists, and people in every profession of life, will find the SCIENTIFIC AMERICAN to be of great value in their respective callings Its counsels and suggestions will save them hundreds of dollars annually, besides affording them a continual source of knowledge, the value of which is beyond pecuniary estimate Much might be added to this Prospectus, to preve that the SCIENTIFIC AMERICAN ia a publication which every Inventor, Mechanic, Artisan, and Engineer in the United States should patronize ; but the publication is so thoroughly known throughout the country that we refrain from occupying further space TERMS OF SUBSCRIPTION—Two Dollars a Year, or One Dollar for Six Months Southern, Western and Canadian money or Post Office stamps, taken at par for subscriptions Canadian subscribers will please to remit twentysix cents extra on each year's subscription, to prepay postage CLUB RATES, Five Copies, for Six Months$4 Ten Copies, for Six Months$8 Ten Copies, for Twelve Monthsgl3 Fifteen Copies, for Twelve Months$23 Twenty Copies, for Twelve Months$28 For all clubs of Twenty and over, the yearly eub scription is only $1 40 Specimen copies will be sen gratia to any part of the country MUNN amp; CO, Publishers and Patent Agents, No 138 Fulton street, New York

This article was originally published with the title "Mechanics" in Scientific American 13, 30, 240 (April 1858) 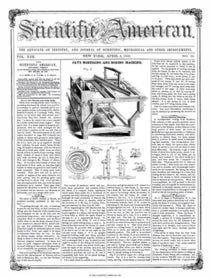