Singing His Own Song

This Is Your Brain on Music: The Science of a Human Obsession
by Daniel J. Levitin. Dutton Press, 2006 ($25)

Everyone knows that music can calm a savage beast, rouse a marching platoon or move lovers to tears. But no one knows exactly how. Daniel Levitin, a professional musician, record producer and now neuroscientist at McGill University, explains the latest thinking into why tunes touch us so deeply. He also speculates about whether specific pathways have evolved in our brain for making and listening to music.

Using brain imaging, Levitin has documented neural activation in people as they listen to music, revealing a novel cascade of excitation that begins in the auditory system and spreads to regions related to planning, expectation and language as well as arousal, pleasure, mood and rhythmic movement. "Music listening, performance and composition engage nearly every area of the brain that we have so far identified and involve nearly every neural subsystem," he notes.

Music’s effects on neurons are so distributed that in some cases stroke victims who can no longer decipher letters can still read music, and some impaired individuals who cannot button a sweater can nevertheless play the piano. Levitin describes new insights into these conditions as well as disorders that cause certain individuals to lack empathy, emotional perception and musicality. He and others suspect a cluster of genes may influence both outgoingness and music ability. He also posits that music promotes cognitive development.

Not surprisingly, music reaches deep into the brain’s most primitive structures—including our ancient “reptilian brain” tied to motivation, reward and emotion. Music elevates dopamine levels in the brain’s mood and pleasure centers in ways similar to those
triggered by narcotics and antidepressants. Levitin also explains how the neural underpinnings of auditory stimulation and mate selection reach far back in life’s evolutionary scheme.

Levitin has no agenda per se, although the book is a rebuttal of sorts to scientists who
say music has served no purpose other than to pleasurably stimulate auditory nerve endings. He simply explains an emerging view about the coevolution of music and the brain. To tell his tale, Levitin engagingly weaves together strands of his own life as a professional musician (who dropped out of college to form a band) with those of his transformation into a neuroscientist. To revel in Ravel’s Bolro or Charlie Parker’s Koko, he reminds us, is to stimulate the brain in a “choreography of neurochemical release and uptake between logical prediction systems and emotional reward systems”—a ballet of brain regions “exquisitely orchestrated.” —Richard Lipkin

Despite the onslaught of text messaging, e-mail and emoticons, we still enjoy speaking to one another, if only over our cell phones. Casting the voice as an unsung hero, British author and radio broadcaster Anne Karpf challenges the notion that the visual has superseded the aural and oral. She argues that “there are three reasons for exploring the voice”: it is distinctly human, vital and just plain fascinating.

Karpf begins her case by pointing out that unlike other primates for whom certain vocalizations are innate, we gradually develop our voices by learning. Humans can produce 325 sounds with vowel and pitch combinations alone. To convince us that the voice is as vital as the writ ten word, Karpf demonstrates that words are only one color on a verbal palette that includes pitch, tone, timbre, volume and emphasis. Examples of sentences whose meanings are voice-dependent provoked this reviewer to read aloud and to think twice about the different tones with which my e-mail compositions could be read before clicking my “send” icon.

Commenting on the purely physical attributes of speech, Karpf reminds us that the voice carries as much personal data as a fingerprint; by simply analyzing a recording, future technologies may reveal our location, gender and feelings. Whether we welcome or dread “voiceprint” technology, our speech is bound to our identities and therefore to our survival.

The enthusiastic author presents a pile of other fascinating facts documented in 80 pages
of references. Somewhat repetitive, the book delivers catchy self-contained sections to ensure that the main points do not escape those with byte-size attention spans. Rewards await more patient readers, as Karpf explores politics and society from an acoustical angle. Her conversational and distinctly feminist style dominates sections on the philosophy behind baby talk, reasons for cultural dissonance, how voice and gender shape one another, and public speaking. Readers will develop the ability to listen rather than simply hear. —Brie Finegold

Down in the Swamp


In his 1983 treatise, The Reflective Practitioner, philosopher Donald Schon explained that many professionals negotiate a tricky landscape between a high ground of theoretical
questions and a swampy lowland of messy, real-life situations. The quandary is that the issues of the high ground, though easy to resolve, are relatively unimportant to most people, whereas the swamp involves matters of deep human concern. Should the practitioner remain safe or descend instead into the soup to help real people in real need?

Psychiatrists struggle with such tension daily. Practicing their profession requires theory and diagnostic definition, yet reaching a patient requires an emotional bond between the two individuals. David Brendel, an assistant professor of psychiatry at Harvard Medical
School who has academic training in philosophy, explores the complexity of this tension and how it vexes modern mental health care.

“The disorder in twenty-fi rst-century psychiatry is all about the search to integrate human values,” Brendel writes. “With no objective moral or conceptual compass to orient today’s practitioner, the world of clinical psychiatry remains messy and ill-defi ned.” Despite increasing precision in biological psychiatry, he adds, “inherent limitations” of such approaches often lead to treatment shortfalls when faced with “complex and unpredictable human behavior.”

Part of the solution, Brendel advises his colleagues, is to invoke a pragmatic approach espoused by the classical American philosophers William James and John Dewey. Together James and Dewey cultivated an eclectic and variegated view of scientific inquiry and discourse that aims for practical consequences for ordinary people. They emphasized
the need to remain open-minded when interpreting scientific results, which always arise in a social context that shapes the nature and use of new findings.

Brendel highlights his message with a New Yorker cartoon captioned “Richard the Pragmatist,” in which the king proclaims: “My kingdom for a newer, stabler, more centrally
located kingdom!” So, too, for the workaday practitioner, struggling to treat a patient afflicted with recurring depression or anxiety. —Richard Lipkin

The Worst of Evils: The Fight against Pain
by Thomas Dormandy. Yale University Press, 2006 ($35)

A 560-page history of anesthesia sounds like perfect operating-room reading—you would fall asleep before page two. The Worst of Evils, however, is a chatty book, sprinkled with anecdotes and Thomas Dormandy’s opinions—some very interesting though apropos of nothing—on everything from the French Revolution to the Iraq War. The tome is also a history of pain itself, beginning with the ideas of the ancient Greeks and Romans and
ending with contemporary medical pain management.

But more than anything else, Dormandy tells the story of the men (very few women appear) who were important to the fi ght against pain, from Galen in Rome (who compiled medical knowledge around A.D. 200) and early Islamic thinkers to the founders of the modern
hospice movement. Dormandy, a retired pathologist in London, is fascinated by the lives of the chemists, physicians and researchers who advanced our understanding of pain and the means to dull or abolish it. He tells good stories, especially when dealing with 18th- and 19th-century Europe, when science came into its own. One chapter is devoted to three generations of Renoirs—Pierre-Auguste Renoir, the impressionist painter, suffered from rheumatoid arthritis—whereas another discusses Rasputin, the evil holy man whose hypnotic powers helped to ease the pain suffered by Russian Tsar Nicholas II’s hemophiliac son.

In addition to lively, clever writing, Dormandy makes several good points. He provides vivid descriptions of just how awful surgery was for doctor and patient before anesthesia. He reminds us that many religious and medical fi gures initially denounced anesthetics
because they believed suffering ennobled patients and that pain was endorsed by the Bible. The Worst of Evils also has a cynical history of the rise of pharmaceuticals as big business, with aspirin leading the way.

What is missing, however, is the science. Given Dormandy’s own background, how could a book with detailed histories of the introduction of ether and chloroform, the first effective anesthetics for surgery, fail to say a single word about how either chemical works? Only very late in the book does he provide an outline of the nervous system and pain perception,
and except for aspirin and a few other modern medicines there is little about the chemical composition of pain drugs. Furthermore, he devotes only three paragraphs to China and India, which for centuries have had compounds to control pain.

Overall, the limitations of Dormandy’s approach leave the reader disappointed, especially given the number of pages into which some of the omissions could have been painlessly woven. —Jonathan Beard 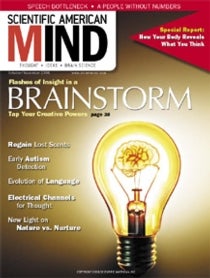