“Though lead pigments were eliminated from interior paints in the U.S. some 20 years ago, multiple layers of lead-based paint still cover the walls and woodwork in many old houses and apartments. Therefore lead poisoning, once an occupational hazard for painters, is now primarily a disease of small children: toddlers between one and five who live in slum housing and nibble steadily at the paint that flakes off dilapidated walls and can be gnawed off peeling windowsills. At a conference at Rockefeller University in March, participants estimated that lead poisoning in children is much more prevalent than is generally assumed, but they pointed out that the ‘silent epidemic’ could be eliminated by aggressive medical, social and legal action.”

“More than 2,100 tons of silver worth $124 million have been removed from the electromagnetic separation plant at Oak Ridge, Tenn., and returned to the Department of the Treasury. The silver was part of nearly 15,000 tons lent to the Manhattan project in 1942 to be converted into windings for the huge magnets that were part of the ‘calutrons’ used to separate fissionable uranium 235 from nonfissionable uranium 238. The process was beset by many technical difficulties but helped to produce the highly purified U-235 in the atomic bomb that destroyed Hiroshima. The silver, then worth more than $400 million, was used as a substitute for copper, then in short supply.”

“The elaborate investigations of sex phenomena in various plants and animals made by Dr. Arthur Mangun Banta, under the auspices of the Carnegie Institution, lead that biologist to some interesting ideas. ‘We are coming,’ he says, ‘to the time when it would seem imperative to revise our ideas of the fixity of sex, with the relativity of sex so emphatically shown in hybrid pigeons, in hybrid moths, and in different species of Cladocera [water flea]. He cites the phenomena of the ‘crowing hen’ and the ‘sitting cock,’ the masculine woman and the effeminate man, as merely conspicuous examples of sex intergrades, which refute the common conception of maleness and femaleness as complete, opposed and mutually exclusive phenomena.”

“With the death of Aviator Jolly a few weeks ago, the Christmas ‘Bullet,’ or ‘strutless biplane,’ has two victims as its record to date. The day following the accident which resulted in the death of Jolly, the writer of these notes happened to be at one of the flying fields on Long Island, where the unfortunate airman was well known and liked. Feeling was running rather high among the airmen and mechanics, who criticized the design of the William W. Christmas cantilever plane. They pointed to the previous collapse of the ‘Bullet.’ Jolly, so it seems, met with the same kind of fate; in midair one of the wings broke off and he was hurled to earth. They were agreed, that this is a rather late day to experiment with uncertain designs.”

“The device herewith represented is intended to aid infants learning to walk, to prevent them from getting into danger and receiving hurts, and to relieve the mother, nurse, or attendant, from constant care and anxiety. Around the infant's body is secured a cushioned ring made to open on a hinge and properly fastened. The base is supported on easily-working casters that allow the contrivance to turn or move in any direction over the floor. Patented through the Scientific American Patent Agency, June 12, 1866, by P. Pallissard, who may be addressed at Kankakee City, Ill.”

Such walkers have since been proved to increase the probability of injury and may delay a child's ability to walk.

“The buffaloes found in the telegraph poles of the overland line a new source of delight on the treeless prairie—the novelty of having something to scratch against. But it was expensive scratching for the telegraph company, for the bison shook down miles of wire daily. A bright idea struck somebody to send to St. Louis and Chicago for all the brad-awls that could be purchased, and these were driven into the poles, with a view to wound the animals and check their rubbing propensity. Never was a greater mistake. The buffaloes were delighted. For the first time they came to the scratch sure of a sensation in their thick hides that thrilled them from horn to tail, until the brad-awl broke or pole came down.” 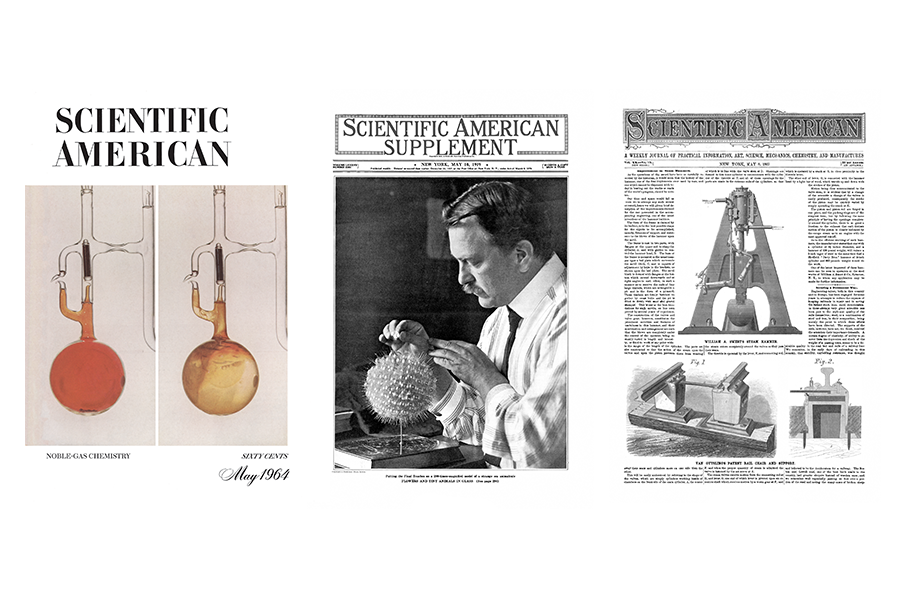 Monkeypox Is a Sexually Transmitted Infection, and Knowing That Can Help Protect People

From One Dying Breath to The Next