On what would become the most watched show in the history of PBS, astronomer Carl Sagan opined that “the Earth is a very small stage in a vast cosmic arena ... our planet is a lonely speck in the great enveloping cosmic dark.” The original Cosmos series, which aired nearly 40 years ago, instilled the haunting sense that there is much we don’t understand about our universe. Indeed, the human mind may not even have the capacity to comprehend what gave rise to all matter since we are three-dimensional creatures living in a potentially 10-dimensional world.

The good news is that we are steadily gaining clarity. In this special edition, we present the most riveting discoveries about our cosmic home, from what we know of the origins of the universe and the cartography of space to the most bizarre phenomena and the enduring question: Are we alone in the universe?

Back to the problem of perception: Recent calculations by Niayesh Afshordi, Robert  B. Mann and Razieh Pourhasan hint at a protouniverse—a fourth spatial dimension that existed even before the big bang and eventually exploded, casting a visual projection of that explosion. The resulting image could be the universe as we see it today. Another possibility is that during the initial expansion of the universe after the big bang, cosmic “bubbles” created multiple—if not an infinite number of—universes, of which ours is just one iteration.

Also in the mind-boggling department: Researchers speculate that entangled black holes could serve as wormholelike corridors around the universe. We are discovering freak molecules floating in space that could never exist on Earth and enormous black holes that tear apart stars. Our universe certainly has a flare for the dramatic, though perhaps not when it comes to living things. Whether or not Earth is the only place that harbors animals, plants and microbes remains an open question, but we are scouring planets and moons for signs of life.

The scale of these stories seems massive and shadowy at once, but Sagan might say that we are more capable and entitled to understand it than we know. “We are made of starstuff,” he said. “We are a way for the cosmos to know itself.”

This article was originally published with the title "Mysterious Universe" in SA Special Editions 26, 4s, 1 (September 2017) 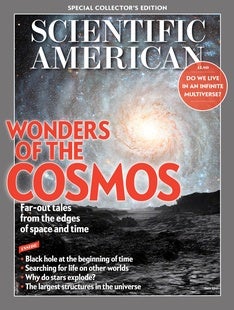