We frequently receive letters that contain queer suggestions ; the writers, being full of comic veins, let off their fund of humor on our editorial heads. As a sample, here are two inventions:—First, a Jersey gentleman thinks (at least he says his wife does, and that's the same thing) that some old bachelor must have invented the " diaper" we noticed a few weeks ago, and that as an improvement his wife has invented a novel piece of apparatus. She proposes to attach an india rubber bag to the feminine shanghai, in which it can deposit its eggs, and thus prevent them from being lost ; and as this is a fast age, she would also train them to come to the kitchen door, and announce when they had deposited an ovum. Secondly, a southern correspondent, much deploring the great waste of time and expense consumed in eating, has invented a chewing and stuffing machine, by which all the inconveniencies of the table will be removed, and all that need be done is to place a piece of food in the hopper, turn a handle arranged on the barrel-organ principle, and the food will be masticated, eaten, and digested in a few" minutes, to the tune of " Yankee Doodle." After this, who shall say there is no fun in science, and no comicality in invention 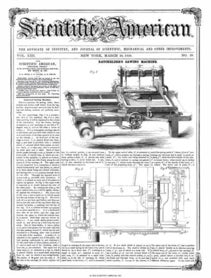