At a talk in mid-November hosted by Pioneer Works in Red Hook, Brooklyn, astrophysicists Rebecca Oppenheimer and Natalie Batalha speculated on the chances that life exists on exoplanets somewhere in our galaxy. Most likely, Oppenheimer said, life is ubiquitous in the universe, but it might not take the form that we imagine. Of the thousands of exoplanets already detected, our telescopic abilities limit the level of detail we can make out, even in the nearest planetary systems. Space is just really big, and other stars and their planets are far away. As senior editor for space and physics Lee Billings writes in this issue, the near-term big goal of astronomy in this country is to devise the next-generation telescope—essentially an upgraded, supersize version of the Hubble Telescope. Likely to be completed in the 2040s, the new endeavor would scout for habitable planets in the galaxy and for alien life (see “Hunt for Alien Life Tops Next- Gen Wish List for U.S. Astronomy”).

When we look into the night sky, Batalha said, we aren’t looking at individual stars, but instead each speck of light is a planetary system and therefore a candidate for housing life. Astronomers indeed must devise grand plans to make progress while looking off-Earth. To that end, another telescope—with a price tag of $10 billion—is set to launch this December, as writer Nikk Ogasa reports (see “The Nail-Biting Journey of NASA’s James Webb Space Telescope Is about to Begin”). Yes, space is really big, but we have the ambition to see across the miles.

This article was originally published with the title "New Views across the Galaxy" in SA Space & Physics 4, 6, (December 2021) 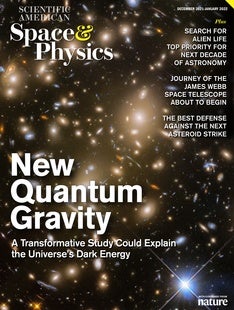