When Russian-American artist and cognitive scientist Allen Tager thinks about his childhood in the Soviet Union in the 1960s, his memories are violet-tinged. “We had one ink color, violet,” he reminisces, “and it was kept in glass jars that tipped over constantly. My hands, school uniform, and textbooks were perpetually covered in violet stains.” Outside of the classroom, in contrast, violet was inexplicably absent from household objects and other everyday items. Years later, when Tager fell in love with the paintings of Russian artist Mikhail Vrubel (1856–1910), his fellow art students dissuaded him from creating “a similar violet harmony” and asked him to repaint the violet shades in trendier purple tones.

The ostensive unpopularity of violet versus purple nagged at the back of Tager’s mind for much of his life, eventually setting him on a 20-year journey across 193 museums in 42 countries. Tager’s search traversed time as well as space, compelling color examinations of paintings from ancient Egypt and Mesopotamia to their contemporary counterparts—and every era in between. On his quest for violet, Tager scrutinized 139,892 works of art, using 1,500 Munsell color chips as standards. The results, published in a 2018 paper, were startling: barely any artworks produced before the early 1860s featured the color violet. Even old masters such as Jan Brueghel the Elder (1568–1625) and Jan Brueghel the Younger (1601–1678), who specialized in painting flowers, did not bother with the hue.

Then, the 19th-century arrival of French Impressionists in the art scene transmuted the dearth of violet in a cultural explosion. Violet burst forth in paintings and was ultimately embraced by the garment industry, becoming ever more present in ordinary clothing and other textiles. Some 50 years after critics accused Impressionists of “violettomania,” the color became established in artists’ palettes. The process by which violet entered all spheres of life took more than a century, Tager asserts, and only achieved full potency in recent times.

But why do so few paintings, pre-Impressionism, include violet? Tager and color scientist collaborators Eric Kirchner and Elena Fedorovskaya venture that the explanation is neither the use of ancient roots in older paintings nor the introduction of cheaper pigments in the 1860s. Did the rarity of violet in nature play a role? Or the confusion about the terms “purple” and “violet” among speakers of English and other languages? The answer to the quandary, much like the color violet in old masters’ paintings, remains elusive.

Arctic Snow Is Shifting to Rain As Temperatures Rise

To Better Persuade a Human, a Robot Should Use This Trick

What is 'The Cloud' and How Does it Pervade Our Lives?

Why COVID Deaths Have Surpassed AIDS Deaths in the U.S. 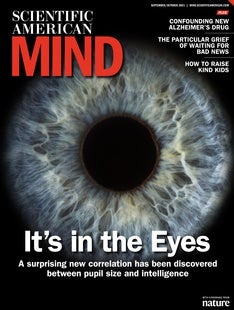