It is tound that if we diminish the thickness of transparent bodies to a certain degree, instead of transmitting and reflecting white light, it is iu both cases colored; this is seen in soap-bubbles, thin films of glass, mica, c. In all these cases the colors are due to the interference of the luminous rays, and the different colors depend upon this interference— the light from the under-surface ot the film interfering with that reflected from the upper. In this manner De la Rue applied iridial colors to paper, plaster of Paris, wood, c, by dropping a colorless varnish on water, and lifting up the substance under the colors thus produced, giving to objects the appearance of the mother-of-pearl, the iridescent hue of the plumage ot bird?, the shields' of beetles, and colors of a like nature. The same colors are frequently seen when oil and other substances, not soluble in water, are thrown on that liquid; these colors are also produced by the reflection of light from del irately grooved surfaces, as is seen in the mother-of-pearl, and whalebone which has been cut transversely. By cutting grooves in polished steel or other metallic surface, at the distance of from the 2,000th to the 10,000th of an inch apart, the same colors are produced, and I have frequently succeeded in producing them by corrugating thin films of gum arabic, tannin, isinglass, c, by rapidly drying a solution of these on a smooth metallic surface. In all cases where the colors are produced by grooved surfaces they are transferable to wax and other plastic subs.tances. Rainbow colors are frequently produced in coating the silver tablets for taking daguerreotype pictures, by the formation of a thin film of the iodide of silver, but when thus taken they are not permanent, as they are blackened by thj well known action of the sun's rays on the iodide of that metal. This objection can be obviated by using a polished copper plate, instead of one of silver, the iodide of copper not being affected by light. They can also be permanently witnessed upon a silver plate by holding it over sulphur which is being sublimed on the fumes of burning sulphur, by which a thin coating of the sulphuret and sulphite of silver are formed, neither of which are affected by the chemical rays of light. When burning silver is used, under a silver plate, the colors are of a bluish cast and of great beauty. Copper, when well polished, and held over the fumes of sulphur o,r bromine, will also receive an iridescent appearance, and objects composed of wood, plaster of Paris, cloth, c, may all be made to receive these colors by first coating them with silver or copper, by means of galvanism, and exposing them to the vapors of sulphur, iodine, bromine, and the fumes of burning sulphur. The colors produced by evaporating solutions of the gums on smooth metallic surfaces are effaced by varnishing them, the grooves being filled up, but this is not the case when iodine or sulphur is used, their intensity being Heightened by the application of varnish. The latter, of course, are not transferable to sealing-wax from not being formed of grooved surfaces. CHAS. W. WRIGHT, M. D. Cincinnati, October, 1852.

This article was originally published with the title "On Rainbow Colors" in Scientific American 8, 6, 43 (October 1852) 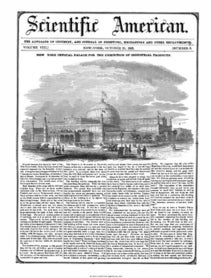