In 2008 an engineer friend of mine helped to design the sky crane that lowered the Curiosity rover from the hovering rocket to the surface of Mars. In commemoration, his signature was engraved on a small plaque on the device. Thirteen years later this past February, that same crane design helped to successfully land Perseverance in the Jezero Crater on the Red Planet. Our space and physics senior editor Lee Billings and journalist Jonathan O’Callaghan report on this remarkable achievement and detail the tall order of tasks ahead for the fifth robotic visitor to Mars (see “Perseverance Has Landed! Mars Rover Begins a New Era of Exploration” and “The First 100 Days on Mars: How NASA’s Perseverance Rover Will Begin Its Mission”).

This time Perseverance is bringing with it nearly 11 million names from Earth to our neighboring planet—each name stenciled on a silicon chip installed on the rover’s body. Like scraps of paper folded inside bottles floating across the ocean, these little pieces of our humanity—our names—have been flung far from the surface of our home planet. Perhaps the goal is the same: to connect, even in a small way, with whatever is found on the other side. Godspeed, intrepid explorers!

This article was originally published with the title "Onward, Intrepid Rover" in SA Space & Physics 4, 2, (April 2021) 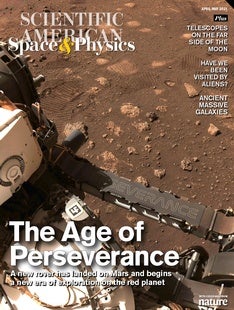